From a Recruiter to a Pilot: I Fulfilled a Life Long Dream of Becoming a Helicopter Pilot 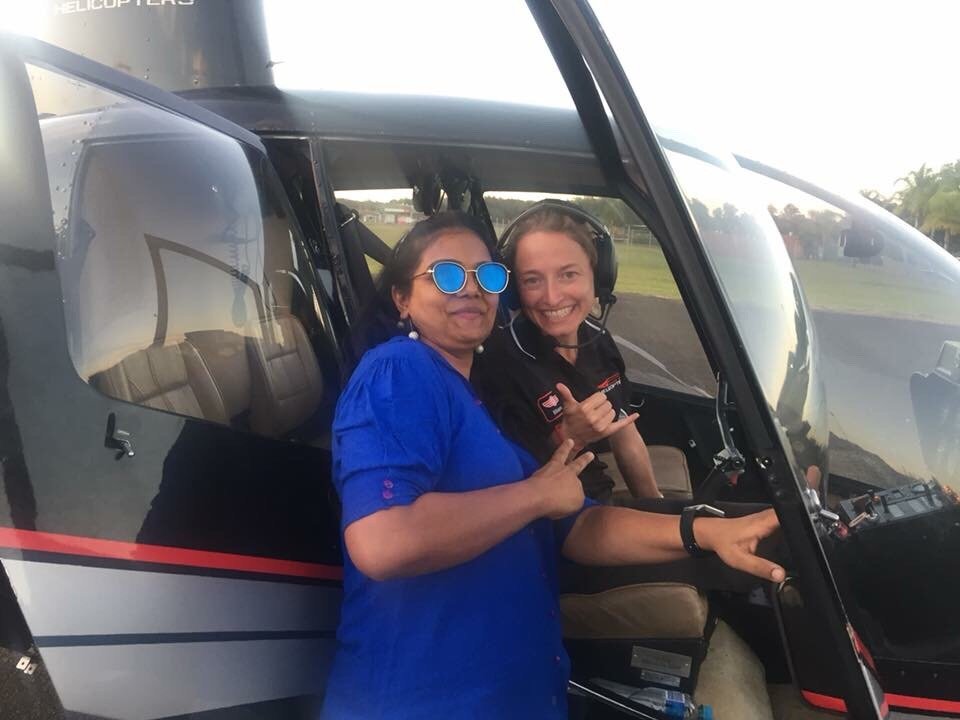 Tracing Back Roots - Dreaming to Become a Pilot

Back home in the Netherlands, there are not too many helicopters. I saw my first ever helicopter in real life when I was 5 years old.

I still remember it so clearly as if it was yesterday when I joined my cousin during her standard plane spotting exercise in our grandma’s backyard. When I saw a helicopter fly in the sky, I was in awe, what a magical machine!

From that moment onwards, whenever I would visit my grandmother, I’d be lying on my back in the grass trying to spot helicopters, but I never saw another helicopter from her garden, since there weren’t many around those days.

At an early age of 5, I was so fascinated by helicopters that I decided to become a helicopter pilot when I grow up. Something that was too good to be true even in my dreams, especially with all odds against me: Wrong country, Wrong gender, No connections in the aviation, No rich parents and No mechanical background.

Time went by, but my dream of becoming a Helicopter pilot did not die. In fact, the passion for helicopters kept getting stronger and stronger.

When I was 17, I graduated from secondary school and contacted the military to see if I could get my license through them. However, I had to sign up for 13 years and I wouldn’t fly a helicopter for at least 2-3 years!

It was fair to say, the Netherlands wasn’t the best country to chase my dream, but that couldn’t stop me.

I thought to myself there has to be a way….that is when I decided to study hard, graduate with good grades and find a well-paying job to be able to finance the course to become a Helicopter Pilot myself.

With this goal in mind, I decided to pursue an International Management Degree from Amsterdam University of Applied Sciences. My degree had an exchange program to study abroad, which took me to Taiwan and China.

After graduating from my Bachelor's Degree, I continued studying and got my Masters degree with Merit from Royal Holloway, University of London.

With fluency in English, a background in International Trade & Management, I pictured I’d be able to get well-paid jobs sooner and thus help me make money to finance the course to get a Helicopter flying license.

Next, to this, I knew that if I wanted to become a pilot, I need to be flexible with locations as jobs are often in remote locations especially the more junior jobs.

By living in different countries (through my exchange program), I soon found out that this won’t be an issue. It would also help me understand different cultures and speak a variety of languages which would come in handy with overseas passengers (and it has!).

Since I did not have wealthy parents, I’ve always worked as much as I could in school, which helped me finance my studies and save up where I could. It’s all about setting priorities, if you set them right, the money will come with time & devotion.

After graduating, I started my career in Recruitment. A career that would, if successful, allow me to make a lot of money and work internationally, which would help with my long term goal of becoming a Pilot.

Everything was built around the dream of becoming a Helicopter Pilot.

Flight schools in Australia, America and New Zealand are amongst the best in the world. After working in the Netherlands as a recruiter for more than five years, I decided to move to New Zealand to work and start my training as a Pilot.

When I moved to New Zealand to start my Private Pilot License training, I had to deal with restricted working rights, which I couldn’t overcome.

Hence my decision to cross the ditch and move to Australia. Unfortunately, when I got to Australia, they’d changed the laws on me, which meant that I now had to become a Permanent Resident, before I really could get a job.

I continued my career in Recruitment in Melbourne, a job I loved only for the prospects of becoming a Helicopter Pilot. But soon I discovered that in Australia it was significantly different from what I was used to in the BeNeLux.

It was very difficult to adjust to the Australian market and I was almost about to give up and return to the Netherlands when I was luckily headhunted by one of the most inspiring people in Recruitment, Rob Millington, a very passionate ‘go-getter.’

He listened to my dream and convinced me to give it one more shot.

Rob believed in me and offered me an amazing opportunity which gave me everything I needed.

I was also given a desk with a view of helicopters flying past hourly and more belief and motivation, than ever before that it was possible to fulfill my dream.

He motivated me to keep chasing my dream and literally pushed me to achieve my financial goals and to get my Australian Permanent Residency. I will always be grateful for meeting Rob!

I was so motivated and managed to become the top consultant of the company multiple years in a row.

Rob wasn’t the only colleague who kept me focused on my dream, my colleague Geoff Parker, who has a passion for flying too, would come with me to spot the beautiful helicopters that landed on the Helipads in Melbourne’s CBD and kept pointing out the window, where Helicopters would fly past, to keep me motivated when I needed it.

From Recruiter to Helicopter Pilot! Dreams do come true!

After working at that recruitment company for over 3 years, one day I finally had the $60,000 dollars in my bank account and my Australian PR visa. That day I resigned, I handed in my notice and when asked why: With pride, I could finally say it was to pursue my dream of becoming a Helicopter Pilot.

I did my flight training, had to go through lots of studying, but everything was focussed on Helicopters, they were the best 8 months of my life at that stage.

Soon after I was offered jobs flying in the most unique locations in Australia: Ayers Rock, followed by the Hunter Valley, where the sky is now my limit.

No experiences in life get wasted. It all builds you in some way or the other. I would like to share a few Key Take-Aways from my journey:

Do you have a dream or a passion that you are yet to pursue? Or have you started working on it?

I would love to know your journey in the comments below.

If you want to become a Pilot, I would love to help and inspire you to achieve your dream!

For more information on becoming a Pilot, please visit our flight school website. For scenic flights with me over the Hunter Valley (North of Sydney, Australia) please connect to me on LinkedIn at Bibianne van Latum and if you’re ever in the area don’t hesitate to stop by our office to say hello!