This CA went from a trainee to a two-time CEO by focusing on doing a great job every single time: Meet Sameer Chadha 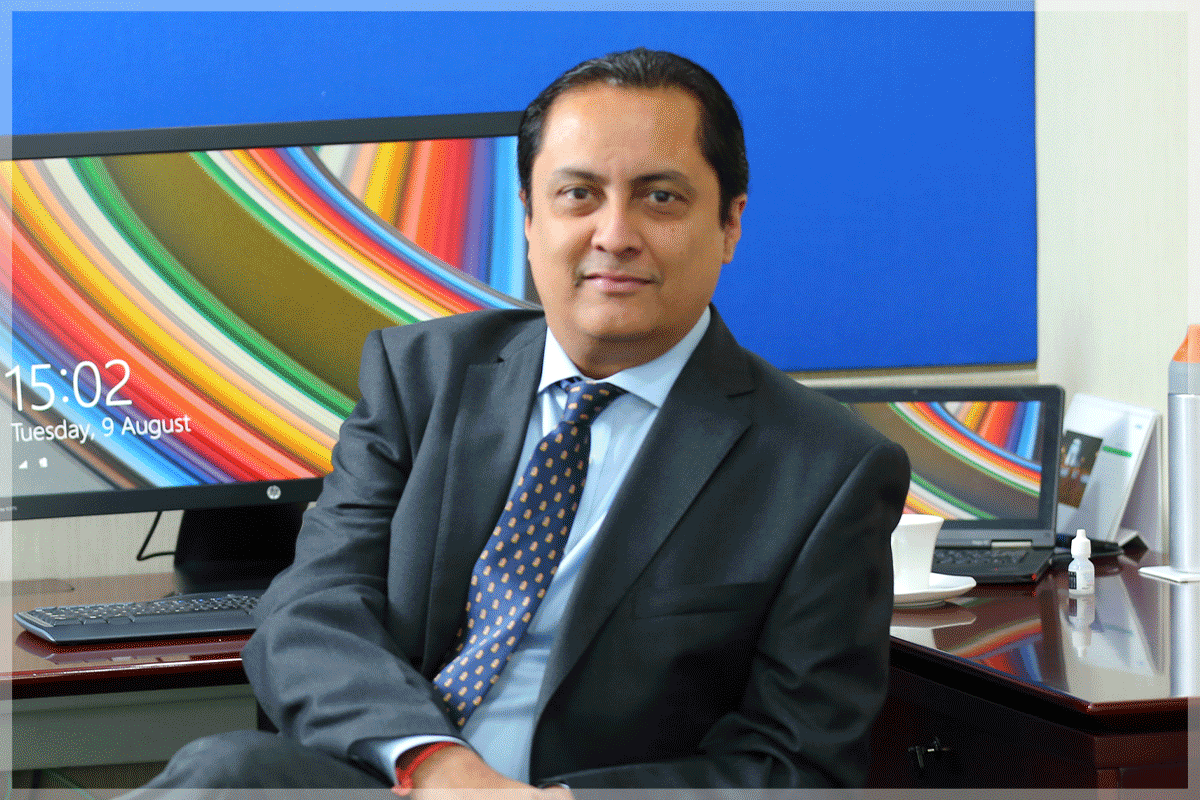 Growing up, I was one of those kids who enjoyed studying and would typically be sitting in the first row asking multiple questions, a habit that has stood me in good stead all my life. I have an insatiable curiosity and as a consequence never tire of asking questions (though I am sure my team and my wife may be tired of answering them ! )

My parents were medical doctors, yet, there was no pressure for me to follow in their footsteps. Early on, as children, my brother and I were given a lot of freedom to pursue our own interests and pick our own careers.

So, while I pursued Science until Grade 12, I shifted to Commerce thereafter and went on to complete a B.Com. (Hons.) degree from SRCC, the University of Delhi, which is a well-known college in the North Campus. Those were such fun, carefree days and something I would live over if I could.

Why CA? Back in the late '80s, a CA and MBA were the logical choices after a B.Com. degree - and I applied and got through as an articled assistant at A.F. Ferguson & Co and here started my CA journey.

Like any other CA student, I had to put my head down and study hard, but the fact that I enjoyed learning, studied consistently and worked hard helped me clear all my exams on the first attempt.

In July of 1991, much to my delight, I qualified as a CA. This remains one of the key milestones in my journey.

Moving from a finance to an operations role

As I started my career, I didn’t have a long-term view mapped out.

During my articleship, I had the privilege of auditing one of the largest multinational food and beverage organizations, Nestlé, for three years in a row.

After qualifying as a CA, they offered me a role as a Management Trainee in the Finance & Accounting Division, which I was happy to take up.

Being in Nestlé taught me about structure, professionalism and process orientation. I credit this job with laying a strong foundation for my career.

Fast forward to 1994, I was doing well at Nestlé and as part of my career development, I had to move to a factory location. However, I had just gotten married, I liked living in Delhi, my wife was working too, and at that point in time, I did not want to relocate.

And so, I started to look for opportunities and that’s when the Bank of America opportunity came through and I was offered a role in its Consumer Banking Operations team.

There I was exposed to multiple facets of consumer banking: branch operations, customer service, contact centers, teller operations and clearing.

Since I am generally a detail-oriented person, I like numbers and am comfortable with quantitative analysis, and I enjoy engaging with people—this role ticked a lot of boxes for me. It was here that I discovered my forte for operations.

In October of 1999, the retail operations of Bank of America were sold to ABN AMRO, and my colleagues and I moved there. At the end of my tenure, I was the Head of Consumer Banking at ABN AMRO. Changing tracks for the right role paid off!

Around the turn of the century, shared services/offshoring was gaining traction. Given that this industry was predicated on the efficient running of scale operations, I thought it was well-suited to my skill sets.

I, therefore, took a leap of faith and took on a role as a Vice President at Firstsource Solutions, a Business Process Management (BPM) company that had been floated by the ICICI Group and was looking to scale up its operations.

After a great four-year stint, I proceeded to Lehman Brothers as Senior Vice President in the Mortgage Capital operation. Lehman’s offshore captive had also been recently set up, and I saw an opportunity to join a big brand investment bank and grow the business.

Both these opportunities taught me so much about the BPM space—a fast-growing industry that also helped me develop my skill at managing large-scale businesses and large teams.

From a functional role to an enterprise leader: first time CEO

By now, I realized that I love opportunities with organizations that were looking to grow, giving me the chance to add value and grow with them.

In 2008, I was offered the Chief Operating Officer (COO) role at Barclays Shared Services (BSS). This role would allow me to be close to my family again as it was based in Delhi (the OneSource and Lehman roles were in Mumbai) and, furthermore, Barclays was looking at scaling up its shared services business. It was a great offer and I took it up.

In roughly two years, I was elevated to the role of the CEO of BSS.

This was my first time as a Chief Executive Officer and I can say that it’s not easy having the top job in an organization.

As CEO, for the first time, I had to manage all functions—finance, HR, IT, etc., and not just operations. This was a lot to assimilate, but in the early days, I kept reminding myself that I was given the job because the company had faith in my abilities.

My propensity to ask questions, and delve deep into the details of every function, helped me up the learning curve.

I found that I really enjoyed my job, and I was learning so much with every passing day.

I am proud of my stint at Barclays, where we were able to drive a vibrant culture and achieve significant growth, from a team of 700 colleagues to c.10,000, during the six years that I was the CEO.

By now I had 25 years of corporate experience and I was asking myself “what next?”, as all of us do, from time to time.

Around the same time, KPMG Global Services (KGS) offered me the opportunity to be the firm’s CEO. This was a good opportunity to join another well-known brand, understand a new industry and participate in its growth journey.

During the early days, I spent a lot of time understanding the contours of the business, given this was a new industry.

As they say at KPMG, you have to be a student of the Firm, and that is what I tried to do.

It’s been almost five years and I can say that I am very proud of our organization, colleagues and culture, and the way we are able to contribute to the success of KPMG globally.

Challenges along the way

Over the course of a 30-year career, one will inevitably face challenges, and I try to always see the opportunity in each challenge.

Transitioning to different roles and moving organizations is not easy.

With every new role, I have had butterflies in my stomach. But one way I have learnt to handle transition is to always be in the learning mode and put in the effort to understand an organization, its stakeholders and the industry. There is no better way, in my view, to get comfortable with your role.

Leading an organization is a big responsibility, and the realization that the buck stops with you and that you are responsible for people’s careers, their aspirations and their belief and faith in the organization, is a humbling one.

I’ve always tried to create a culture that I would be comfortable with: one of meritocracy, inclusiveness, transparency, open and honest communication, and opportunities and growth for colleagues, and which you can enjoy yourself and have fun.

I am a film buff, and there is one strong leadership lesson from the movie Spider-Man: “With great power comes great responsibility”.

Also, as a leader, one is constantly being watched and emulated. Colleagues observe what you do and see if your words match your deeds and actions, something you always have to be conscious of.

You are the ‘Chief Culture Officer’ and must role model behavior that people want to emulate.

For leaders to stay in touch with colleagues and their experience in an organization, the CEO needs to inculcate a culture of transparency and trust to encourage people to say what is on their minds.

As a CEO, you are supposed to be on your ‘A game’ and on top of things. However, vulnerability is acceptable and natural. I am comfortable saying “I don't know, but I want to know”, and never hesitate to ask questions as that is the only way one can gain clarity.

Lastly, humility is key as a leader. Success is always ephemeral—here today, gone tomorrow. So, people should remember you more for the person you are rather than the title you hold.

Learnings from my journey...

As I look back over the three decades of my career, I have had many important learnings.

First, be patient. In today's world where everything is here and now and available at the press of a button, remember that careers take time to build - there is no substitute for hard work and there are no shortcuts. You will get to where you have to get to. Talent and merit always find their way.

Second, focus on the things you can control: your performance and attitude. Try not to let external events create free-floating anxiety.

Third, remain grounded, irrespective of success. Remember, your success is the sum total of the efforts of so many people (family, friends, mentors, colleagues, etc.) and not just yours. I have to mention that my wife has been my greatest source of support, inspiration and motivation. I could not have achieved what I have without her; she is my rock.

Fourth, lead with the head and heart. Basically, have IQ (intelligence quotient) and EQ (emotional quotient) as dealing with people often means dealing with emotions. As Maya Angelou said, “People will forget what you said and what you did, but people will never forget how you made them feel”.

And finally, all leaders cast a leadership shadow. This is the set of behaviors that you consistently display and what you are known for. Strive to cast a shadow that others feel they can learn from.

Do you have a message or a question for Sameer? Comment and he will get back to you.