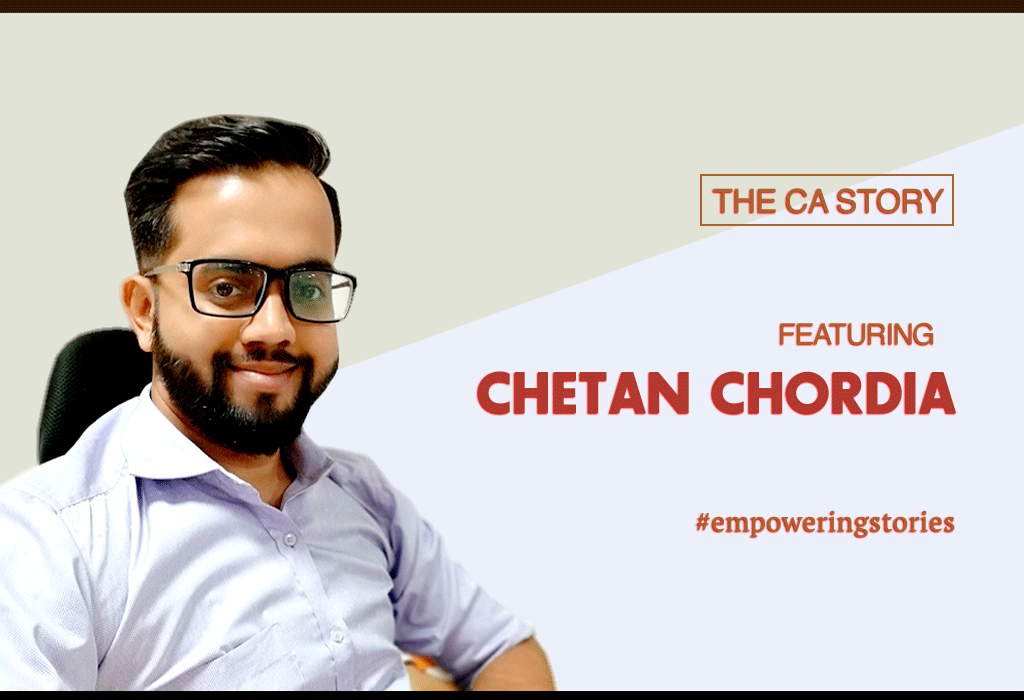 How CA Happened to Me

It was not planned that one day I would be a Chartered Accountant. Since I lost my dad at an early age, I started working at my relative's shop. Life was going smoothly from home to shop & vice versa.

A week before my 12th standard results, one of my friends called me asking me as to what was my career plan for the future. I told him - B.Com and then look after the shop. He suggested a few management and mass media courses. However, they were not appealing to me as they were expensive.

Then after a week, he said that he had found a course which was high in value but had very little investment and that's how CA happened to me.

Challenges in my CA Journey

CPT & IPCC Journey: We both enrolled for CPT (1st level CA). Days passed and we both passed CPT with a distinction. Since it was my first distinction in my life, I thought LUCK was with me. Nov 2009 was my IPCC (2nd level CA) attempt. I cleared my IPCC in the 1st attempt !!! I did study with all my dedication to it.

Articleship Journey: Then I started with my articles. The first year I hardly got any exposure as my seniors used to handle everything. I USED TO WONDER if I would ever get a chance to learn but I KEPT MY PATIENCE and waited for an opportunity. Once the seniors left after completing their tenure, I got LOTS OF WORK and met the expectations of my boss !!!

Articles was a lot of pressure. I did not join any coaching class as I knew, I would not be able to attend it. However 5 months before my CA Final exam, I enquired with a lot of institutions if they could give me admission but I was too late. I got worried, but finally found one coaching center that agreed to help me prepare for my attempt.

Love at First Sight & CA Final: The day I registered for finals, I got my study modules from the ICAI. When I saw the modules I was shocked as they were such huge books. Somehow, I carried those heavy modules home. On reaching home, I noticed a girl at my neighbor's place. Whatever on earth you may call it - the moment I saw her I fell in LOVE with her !!! LOVE, AT First Sight, maybe a myth to many, but it happened to me!!!

That very moment, I forgot about my CA Final attempt. I got to know her name that day but did not get a chance to speak to her. But FACEBOOK came to my rescue!!! I sent her a friend request which she accepted after a week. The day she accepted, we chatted for 4 hours at a stretch.

Slowly the chatting began via text messages as well. However, a few days later I got this sudden realisation that I have my CA Final Exams coming up in 5 months or so. I was worried about what should I do - focus on my new found love or my exams. Somehow, I decided to focus on BOTH. I decided to appear only for CA Final Group 2.

Through all this, the relationship between me and that girl was going strong. During my study period, my grandparents had come from their native place for my grand father's cancer treatment. We had a lot of relatives coming to see him.

Now my study schedule went haywire. Thus, I changed my routine and studied all night long for roughly 7 hrs. So now during the day, I would chat with my future GF, attend to my grandfather and study at night giving my 100%.

In all this, I was only a week away from the exam.

On the morning of my paper, my grandpa got a paralytic attack. I was already so tensed because of my CA exams and now my grandfather being serious really got me worried. He eventually passed away the same week. In the midst of all these obstacles and problems, I appeared for my exams.

I had NO HOPE that I would clear, as my papers went really bad. However as destiny would have it, I managed to clear CA Final Group 2. It was a REAL MIRACLE.

Now I considered myself a half CA and asked the love of my life if she would be my Girlfriend - and she said a straight - NO. I took that positively and again said to myself - Okay ask her again. Later on, I asked more than 100 times and she rejected me every single time!! But I did not lose hope. Funny but true!!!

From Braving Failures to Finally Qualifying as a CA

Now I had only CA Final Group 1 pending to become a CA. For this exam, I had only 15 days of study leave. Also, things got a little messy between that girl and me. I wasted a lot of time in the process and did not focus on my studies and thus failed miserably.

I was so dejected with myself. It was very difficult emotionally. I informed that girl about my results. To be honest that failure gained me sympathy from her and what was supposed to end between us started all over again. I started my preparation again and my relationship with that girl started to get amazing. I wanted to clear my exams this attempt. I wanted to become a CA so I could propose to her again. LOL

This time I took leave for 1 month and prepared well. Again I studied all night long and spent the whole day speaking to my future GF. After giving my first paper I was sure that I would fail this attempt as well. My hope of clearing CA and proposing to that girl was getting blurred.

I wanted to just QUIT and not appear for the remaining papers. However, I said to myself lets appear for that girl, what she will think that this guy is not courageous enough that he QUIT. So just to keep up with my GOOD IMAGE, I decided to appear.

Within a week of the exam, we had a fight and we decided not to speak. I promised her once I clear then only I would call her up. Now I had to stick to my decision, so we did not speak for a month. Also, I knew my exams were horrible and clearing was IMPOSSIBLE.

On the day of my result, I did not even check my results. My friend called me and told me 'I PASSED'. My mother and sisters were so happy. The very same day I called her and told her I cleared my exams and I am a CA now. She sounded super happy.

Again, I proposed to her (yes I asked her again LOL) and again she said NO and I accepted rejection one more time. This time we stayed friends.

A few weeks later I got a call from Aditya Birla and few other companies. I had decided to give it a skip as I was like - such big companies and I am from a very small background, I surely won't be selected. However, I pushed myself and went. Glad I DID, I got selected. That taught me a big lesson - 'EVERYTHING IS POSSIBLE. We are NOT SMALL our THINKING makes us so'.

Key Lessons from my CA Journey

My journey was a fun one. The only problem was, I had financial issues because I lost my dad long back and I had to sacrifice on many things. I was never demanding in life and accepted things positively.

Whenever I wanted anything, I achieved it with my own capabilities. This childhood approach made me a very cool and calm person which I realized only during my CA journey

It is said while studying CA, you are NOT supposed to enjoy life, fall in love but I fell in love during the journey, got rejected several times, faced so much of family drama, saw the demise of my grandpa, lost all hopes.

The only thing I could say is HEART BREAKS could be miserable, anyone going through this should- TAKE COMPLETE RESPONSIBILITY, WAKE UP, SHAKE UP, MOVE ON and LEARN TO LET GO.

Also one needs to SPEAK to close family and friends who will help you out of it.

You can reach him at cachetan271290@gmail.com/thecastory@gmail.com