Believing in Crypto since 2017: How CEO Avinash Shekhar steered Zebpay through several challenges; giving CAs a vision to lead the Web3.0 space

Shortly after CA Avinash joined Zebpay as a CFO, RBI banned crypto transactions in India.  When the founders left the company he took the plunge to handle the operations of the company. 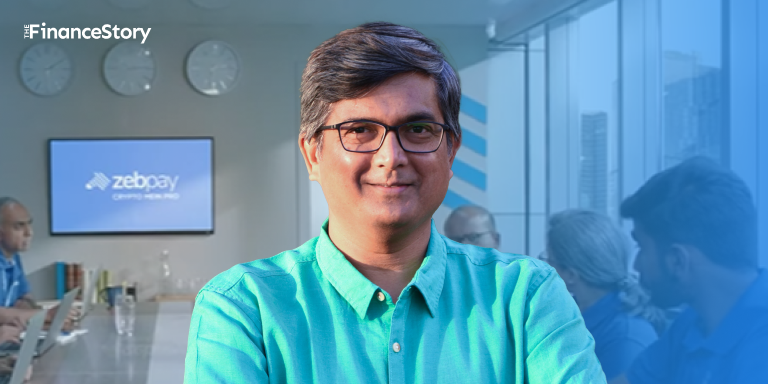 Becoming the first CA of my family and career trajectory

From a background point of view, I am the first Chartered Accountant in my family. It was funny how I chose to do my CA. Most of my friends were studying CA, so I said let’s go and try becoming a CA.

If you want to do an engineering degree or become a doctor, any family has to shell out lots of money, which was in short supply at that point in time for me. So, becoming a CA made sense as I was good in Finance, Math, and Business Finance.

When I joined Airtel in 2000, they were setting up a long-distance telephone network and I was the first employee at that project. I used to work, literally, for 29 days out of 30 days for 12 to 14 hours a day. It was real hard work.

Most of my learnings happened during those five years I was there. My time at Airtel was probably equal to ten years of experience.

After that, I worked in retail; Salvatore Ferragamo, a luxury brand for a short while before moving on to a startup.

Transitioning from the large corporate world to a startup

In 2014, I joined Urban Ladder however my family was concerned about this move, as it was a startup.

Obviously, I had some concerns too; in terms of stability. But I think at that point in time I wanted to take some risks and grow as an individual.

At Urban Ladder it was the first independent CFO role for me.

In Airtel,  there was a significant amount of startup culture, but, in Urban Ladder you cannot call up the head office and say “I need some help” .

In a startup, you have to be the captain of the ship and make all the calls yourself. This is why my stint at Urban Ladder became a very unique experience.

I handled all the relationships with the investors.

You must realise that in a startup ecosystem you will be connected to all professionals working in the portfolio companies of the investors.

For example, when you are part of the Sequoia funded group of Companies you will end up meeting all the CFOs of the portfolio.

This helped in tremendous learning.

As a CA joining the crypto world in 2017

It was mid of 2017 when Zebpay was planning to open an office in Bombay.

I was called to meet the founders and the team. It was a day-long meeting.

They gave me an offer, but I was not convinced.

Zebpay was a startup in the space of crypto and I had very little understanding of the subject.

I had heard about bitcoin, but I did not know the details and I was sceptical about making the move.

At first, I told the Zebpay team that I was not convinced. Then I met the tech founder of Zebpay and he spent three or four hours explaining everything to me.

I went back home and started studying about bitcoin and crypto.

You have to realise that the internet is full of resources on crypto. Some of the books that helped me a lot to understand the system were “The Bitcoin Standard”, “The Fiat Standard” and “The Sovereign Individual”.

I spent hours on YouTube and there are several influencers explaining the merits of Bitcoin. It became very clear that decentralization was the future.

I believed that this was the way forward to enhance my career and joined Zebpay or you could say I joined the bitcoin revolution.

Joining a crypto startup as a CFO

When I joined Zebpay in 2017 as a CFO, there were only 5 people in the top management; three founders, CEO, and myself.

We have to do KYC to do business and we facilitate the buying and selling of crypto.

The role at Zebpay is exciting where I have to track the movement of money in the exchange and stick to compliance.

So, basically, we are dealing with money and that is why controls become very important.

At the same time speed also becomes very important because you are processing over thousands of withdrawals in a day.

During the first six to nine months, I went about putting systems in place and in understanding what is happening at Zebpay.

All was going well at Zebpay until in April, 2018 the RBI issued a notification to banks saying “don’t support crypto”.

It took 18 months for the Supreme Court to reverse the RBI decision. In that interim period, a lot changed in the company.

Banks were closing our accounts and we were always in a constant fight to open new bank accounts which supported digital assets.

In those 18 months, we were keeping the crypto of our customers safe, we enabled deposits and withdrawals.

Then after that, obviously managing banks continued to be difficult.

From Auditing to Web3.0: How this CA fell victim to a crypto scam, bounced back to start a DeFi platform and raise $3 M

Revival of an imminent closure and leading the company without titles

Behind the closed shutters, we stayed alive, waiting for an opportunity to bounce back in India.

When the Supreme Court overturned the RBI letter, in March 2020, we launched within two days in India.

This again was a very exciting and challenging time because for 12-18 months our systems and processes had deteriorated in India.

Many people had left, and new people had come in so restarting that engine was also not easy.

In December 2019, there was a change in the management of the company (the founders had moved out).

I was the only senior person left in the top management and I had to take the plunge to handle the operations of the company.

I must tell you that this is where my work at Airtel proved to be a lifesaver. That experience enabled me to handle all forms of crisis.

At Airtel, I had been in a financial planning position and had to run the business unit by measuring parameters that can run the business efficiently. That is why running Zebpay as a CEO came to me.

By December 2020 our volume grew like 20 times. It was clear that we had bounced back.

Why decentralized system is better than centralised system

Decentralized technology is the most democratic technology.

Today all the systems in the world are centralised and it basically means that there is a single point that controls everything.

In these centralised systems there is a chance that there could be a misuse of trust.

In a decentralized system you do not need a third party to validate a transaction.

Today, you can download Bitcoin software and it is free.

You can download Ethereum software and you can build something on your own.

Now, what happens because of this development?

The speed of innovation increases exponentially. If you have a centralized software which is not open to anyone then innovation becomes slow.

Role of a finance professional in the Web 3.0 ecosystem

Web 3.0 is a way to actually define the ecosystem.

A significant amount of innovations are happening right now. There is a huge opportunity, and finance obviously is a major area that is innovating around this.

The job of an accountant, and auditor, is going to become much more important actually.

I think blockchain and AI are just a tool that will significantly increase the CAs contribution to the new world.

There is actually a huge shortage of people in finance, especially in understanding crypto.

CAs are good at statutory audit, internal audit, reporting, and every area of finance. They should now learn crypto accounting, though not much is known about it.

There are a very limited number of people who understand crypto reporting & valuation.

How does one make reconciliations because there are literally hundreds of thousands of transactions happening on a daily basis in this area of crypto.

This is why I think crypto is a great area of study for any financial professional.