From the Middle East to Vietnam: How this CA leapfrogged his career by looking at the job profile and not just the country 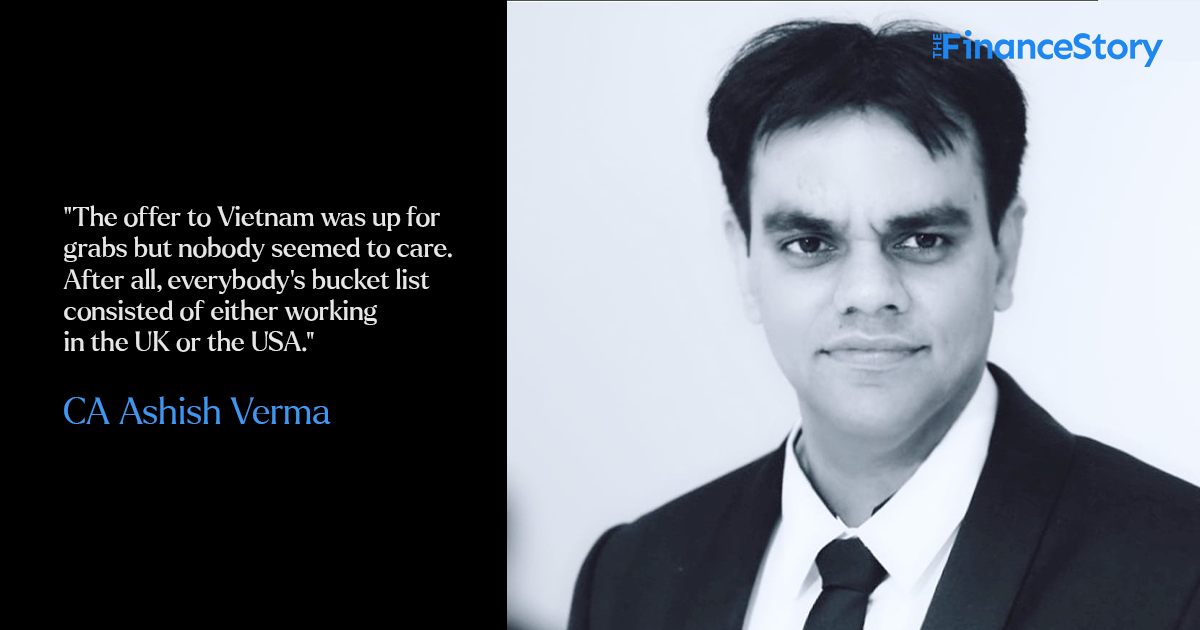 Growing in my career with a zeal for learning

Born with a curious mind, I never missed an opportunity to acquire knowledge.

Finance and Business Management were two of the subjects I was passionate about from my school days. Hence, I had two options - Chartered Accountancy course and a Master’s degree in Business Administration (MBA).

I was in a bit of a dilemma with choosing the right path. Fortunately, I was able to find great mentors who guided me to opt for CA and supported me throughout the journey.

After qualifying as a Chartered Accountant in 2008 and having in-depth technical knowledge, I only had two goals in mind; to broaden my career horizons and create a powerful personal brand.

Like most freshers, I joined a Big 10 Accounting Firm and commenced my career as an assurance consultant at Grant Thornton India. I shifted to IPO advisory later on.

Eventually, I moved to the United Arab Emirates (UAE) and had an amazing stint as a Senior Financial Analyst at Saint-Gobain.

Apart from developing budgets and strategies for the group, I further focused on improving my business acumen in order to transform myself into an effective finance and business leader.

An opportunity to relocate to Vietnam

In 2015 while I was managing the corporate FP&A operations at a large conglomerate in Kuwait an unexpected job opportunity arrived from Vietnam.

The offer came from Kirby Building Systems, a subsidiary of the Kuwait-based business conglomerate wherein I was working.

They were looking for someone who could oversee the entire finance and IT department of the company, that too for regions like the Asia Pacific and Southeast Asia.

The offer was up for grabs but nobody seemed to really care, after all, everybody’s bucket list consists of either working in the UK or the USA.

It is worth mentioning that I may have adopted Finance as a career option but in my heart, I have always been a tech enthusiast.

What more could I ask for?

But there were still a few points I had to consider before jumping in;

“Can I expect career growth in Vietnam?”

“Is the workplace culture in Vietnam optimistic?”

Back in 2015, the ease of doing business index ranking for Vietnam was relatively poor. There were not many opportunities for businesses to invest and grow, and the country was too far behind in terms of digitalization.

As expected, my colleagues and friends were mostly critical of this decision, but I saw an opportunity that was beyond Vietnam’s unfavorable economy.

There was an opportunity to learn and grow from the experience. That was the ultimate goal for me.

Additionally, I heard that Vietnam had a positive workplace culture and a healthy work-life balance. This appealed to me because I did not encourage working 18-19 hours a day at the expense of my health. It was the final push that made me pack my bags and depart from the Middle East.

Starting a career as an expat in Vietnam

Settling down in Vietnam was certainly not a piece of cake.

The culture shock was one factor but another unusual thing I noticed was that Indian CAs are not as recognized in Vietnam as they are in the Middle East.

However, the positive side is companies do not ask for a specific degree but rather enquire whether you have relevant work experience and the knowledge for the job. This proved to be a big advantage but I still wanted to acquire a degree that would be highly appreciated here.

There were two possible paths in front of me - the Certified Practicing Accountant (CPA) program in Vietnam and the CPA Australia program.

Since the CPA program in Vietnam requires all candidates to write the exam in the local language, that option fell off. I went for the CPA Australia program instead, because it would allow me to advance my career.

To be honest, at first, it seemed quite difficult to get used to the new work environment. However, my new colleagues were extremely cooperative and hospitable.

They are not just talented but their problem-solving techniques are unique. Therefore, I tried to understand their point of view because if you want to solve a local problem, you may have to understand their perspective first. After figuring that out, the journey has been relatively smoother ever since.

Moving to a new country proved beneficial for my career

Relocating to different places across the world also happened by chance.

Initially, I moved to the UAE to work in a consulting firm and later received an offer to work for one of the largest conglomerates in theMiddle East.

As I moved to Vietnam, my role as head of the Finance & IT Department became demanding. For that, I had to learn Database Management, DataScience, MachineLearning, Product Building, process mapping, and other relevant tools.

Over the years, the emergence of countless e-commerce and fintech companies, as well as the adoption of blockchain technology redefined Vietnam’s financial services industry.

While deciding to move to a new role, I placed more emphasis on the role and learning opportunities than the country to which I was moving.

This attitude has helped me in my career and given me exposure in multiple verticals including FP&A, Mergers & Acquisitions (M&A), Business as well as Corporate Finance.

It has helped me to acquire requisite leadership, critical thinking, and problem-solving skills.

I noticed over the years that the decision-making process includes some cultural influence and if you expose yourself to multiple cultures, you may learn to see things from different lenses.

Not only does it make you a good decision-maker, but it also helps you build empathy and improve your overall emotional intelligence.

Early in my career, I could see the potential of technology in improving efficiency and this sparked my interest in it.

Advice from one finance professional to another

Whenever there is an opportunity to learn something new, take it.

Be very honest when it comes to your work and most importantly, have integrity.

Even though I predominantly work in Finance, but heavily leverage technology to bring efficiency and effectiveness to the workplace. For example, I use visualization tools such as Tableau and Python Seaborn for effective communication of data and making sense of hidden patterns.

Anybody can learn technology or finance, but in the end, what is going to matter is the kind of person you are - how you approach challenging situations and solve problems.