Starting up in early 40's, this Chartered Accountant co-founded an ESOP and CapTable management platform having raised $22.5 M

After two decades in the corporate world, this Chartered Accountant co-founded Qapita – an ESOP and CapTable management platform having raised $22.5 M

Born and raised in Vijayawada, Andhra Pradesh; I have always been a highly ambitious person.

When it was time to choose a career path, my twin brother Ram and I both decided to pursue Chartered Accountancy.

It was actually beneficial as we motivated each other to study hard. By the age of 21, in 1997, both of us qualified as CA’s.

My career journey started off on the right foot with Hindustan Unilever (HUL), a multinational consumer goods company where I joined as a management trainee.

Here I had the opportunity to lead the finance/commercial team. Needless to say, I received a great deal of corporate exposure at such a young age.

Meanwhile, in the late 90s, the media and entertainment industry was expanding at a rapid pace in India. An opportunity presented itself from Discovery Channel. Without any hesitation, I joined them.

The professional experience I was gaining was unmatched, but I felt it was time to upskill myself. In 2002, I opted for an MBA degree from the prestigious Indian School of Business (ISB).

The rigorous one year at Business School proved to be a game-changer for me.

Although India offered many career growth opportunities, I wanted to expand my vision. That is why after two stints with Sony Pictures and Tata Group, I moved to Malaysia. This was in 2006.

Here I joined Astro, Malaysia’s leading media & entertainment company, looking after the mergers and acquisitions (M&A) process for them.

It was a multilateral role where I was also managing Corporate Finance and Business Development.

Somewhere along the journey with Astro, as Head of Investments, I managed a billion-dollar corporate venture fund where we invested across start-ups.

I interacted with startup founders and have even been on the board and audit committees.

The whole experience was a turning point in my life because it triggered the entrepreneurial self in me.

In 2017, after almost a decade with Astro, I decided to join a startup to get hands-on experience of running one.

I dabbled with the Edutainment startup MAGICA that combined education and content for kids in the range of 7-11 years old. In two years or so, I finally grasped the complexity of building a startup.

And just like that after 20 years in the corporate world, I said “Let’s spend the second half of my career as an entrepreneur.”

I took the plunge mid-career with no intention of looking back.

Just when I had started exploring different startup ideas, one of my close friends Ravi Ravulaparthi expressed his genuine interest to start something on his own. He was an investment banker with over 17 years of corporate experience.

It was actually a delight to know that I would not be going about this journey alone... and from there on, we started this exciting journey.

During our conceptualisation stage, we realised that we wanted to solve a:

After six months of brainstorming, we realized every aspect of banking has been disrupted except for the investment banking and fundraising space.

Personal relationships still drive it and advisors conduct it on a one-on-one basis. However, a banker will seek your attention only if it is a lucrative deal.

Also when establishing a startup, non-finance professionals with little to no fundraising knowledge handle the early stage seed round.

We wanted to assist them with deal-making, fundraising, M&A, and exit strategies through the utilization of technology.

We soon realised this is a very huge problem which needed multiple products.

Now came the big question - what problem should we solve first?

As we were dabbling with those ideas, we came across one major acquisition where Morgan Stanley acquired Solium, a 20-year-old SaaS company that managed ESOPs for many companies.

The reason why they got acquired was that ESOP holders were the next wealth owners. Morgan Stanley's wealth management arm saw the potential early on and tapped into it.

Here we got our starting point.

In the US, fast-growing startups had digital shares. However, startups in India and Southeast Asia managed CapTable and ESOP management on excel sheets.

We saw a huge gap that required tech solutions.

Once you digitize the records, you can solve other problems where you can bring liquidity to the shareholders and ESOP holders in those private companies.

Qapita, a software-as-a-service (SaaS) platform focused on equity and transaction management for the private market was born.

Building Qapita as an enterprise-grade product

We were pretty excited! but then came the next question - how were we supposed to build a fintech startup without a tech expert?

We thought it would be wise to have a tech co-founder. Vamsee Mohan was the perfect candidate for this role. He was Ravi’s schoolmate at IIT Madras.

With Vamsee on board, we started building the minimum viable product (MVP) of the CapTable management tool in September of 2019.

We finalized the first version of the tool in September of 2020.

Around this time, we had successfully raised USD 2.3 million dollars of a seed round from Vulcan Capital, East Ventures and other investors. We used the funding to build a tech team and marketing.

The next step was to track down new possible clients, which was relatively easier for us. Having worked in the corporate sector for over two decades, we had many experienced connections.

We pitched our product to them and continued refining it over the next 3-4 months per their feedback.

In January of 2021, we came out of the beta version and started rolling out the official product.

Today Qapita is an enterprise-grade product, dealing with a few unicorns, soonicorns and hundreds of startups with multiple stakeholders.

Additionally, we have raised a total of $22.5M in funding over three rounds. So, we are poised to grow exponentially. 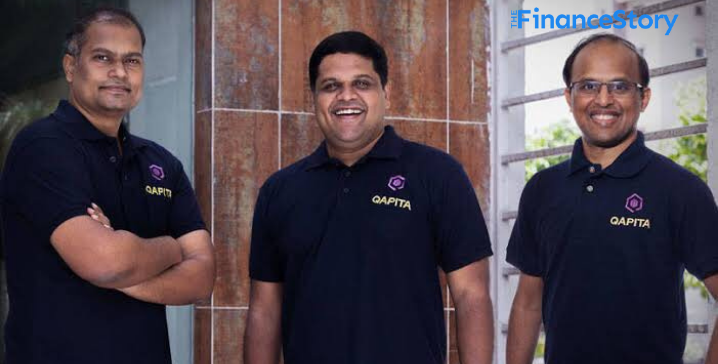 Co-founders of Qapita - an ESOP and CapTable management platform

Challenges along the way

When we started in 2018, the startup ecosystem had not bloomed as well as it has today. So, every investor we approached to fundraise kept telling us that our Total Addressable Market (TAM) is not large.

It took a lot of time for the investors to understand that it was a trillion-dollar TAM. But once they understood that the ultimate problem we were solving was liquidity for the stakeholders in the private market, they knew this was a large trillion-dollar idea.

Another major challenge we faced from the very beginning was talent acquisition. After the emergence of the startup ecosystem, everyone was tapping into the software industry in India creating a shortage of software engineers.

To counter that problem, our co-founder Vamsee attracted the talent by building a learning environment in the organization. That is how we attract and even retained talent.

Apart from this, startup means moving fast to solve a big problem and thus hundreds of challenges show up every day.

Media tends to highlight a lot of 30 under 30 startup founders, but we should not forget that there is never a right time to start.

For example, I started my entrepreneurial journey in my early 40s. It certainly comes with many risks but there are a lot of advantages.

I would say if you are considering starting your entrepreneurial journey even in your 50s, go for it.

You never know if it is going to work unless you try.

If you are a CA Firm or a Startup, you can connect with Qapita at srikanth@qapitacorp.com