Impact of a weaker rupee on the Indian economy

The Indian rupee (INR) is at an all-time low. Retail inflation in India is likely to rise up to 7.5% in April. India is in a big trade deficit right now. 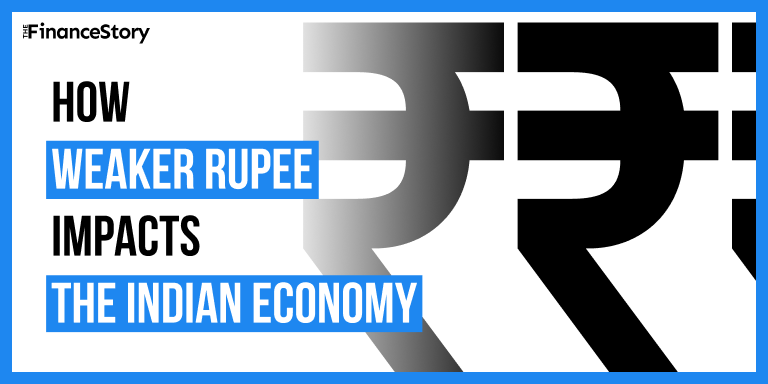 The Indian rupee (INR) is at an all-time low; about 77.57 as compared to the US Dollars, due to the bad selling pressures on Indian Rupee.

Retail inflation in India which almost reached 7% during March is likely to rise up to an 18-month high of 7.5% in April.

India is in a big trade deficit which means we import more than we export.

For importing, we need to sell Indian Rupees to buy foreign currency and use that currency to buy goods. Therefore, we are selling INR.

The US Govt bond yield i.e., the risk-free rate for the investors in the USA is 3.13% currently. This is a very high rate for a developed country like the USA that encouraged the US investors to pull out their money from India and invest in their own country bonds.

For doing this, they sold Indian stocks, got paid in INR, sold INR, and bought USD putting the selling pressure on INR.

Reasons for depreciation of Indian Rupee

If the Indian rupee keeps on depreciating, the prices of goods are going to rise because the Government might use its printing power to print more money and pay off its debts.

Also, if INR keeps depreciating, every penny in your name will lose its worth before you know it.

The country’s fertilizer subsidy bill is supposed to hit a record of Rs 1.9 trillion this fiscal year, according to Crisil.

India’s current account deficit is expected to widen from 1.5% of GDP in FY22 to almost 3%.

Further, with the hike in commodity prices due to a shortage in supply, the cost of production for exporters has gone up.

It has affected the export of items such as jewelry, gems, petroleum products, organic chemicals, etc, which constitute a significantly major portion of the Indian export system.

With rising commodity prices due to supply shortages, the cost of production for exporters will go up, affecting their margins.

Effects on the overall economy

There is a definite possibility of further weakening of the Indian rupee with widening current account deficit and depleting foreign exchange reserve. In addition to that, with increasing landed prices of crude oils and crucial imports the economy is shifting towards cost-push inflation.

Theoretically, a weaker rupee should be beneficial to India's exports but in the current environment of weaker global demand, a fall in external value will in fact be threatening to the economy.

Similarly, the risk of increasing imported inflation may be present, also making it difficult for Central banks to maintain low-interest rates for longer.