On the second day of the 21st World Congress of Accountants hosted by ICAI and IFAC, Gautam Adani stated how India is on its way to becoming a $30 trillion economy by 2050.

The 2nd day of the 21st World Congress of Accountants started off with an insightful session on the topic of ICAI being ‘A Knowledge-Based National Standard Setter.’

ICAI is the national standard setter and plays an important role in the global standard-setting process. However, CA A.C. Chakrabortti - Past President, ICAI said that the Institute and its members are going to face two battles, namely technological changes & climate change.

In his speech, CA Gyan Chandra Misra - Vice Chairman of the Internal Audit Standards Board of ICAI called attention to the new initiatives taken by the board and how 22 new standards on internal audit have been issued, and 28,700 Members have completed the Concurrent Audit course so far.

“Responsibility of the internal auditor is also changed drastically because of the change in expectation of the various stakeholders of the community.” Said CA. Misra.

While putting forward a historical perspective, CA Pramod Jain – Chairman of The Accounting Standards Board (ASB), ICAI commented that in 1977 the institute set up ASB. Now it is mandatory for corporate to comply with the AS.

The 2nd Session started with Swami Ramdev, Founder of Patanjali Ayurved Limited expressing his desire for India to be a "Financial Super Power".

"CAs are the permanent Finance Ministers of India and the World. CA's should also evolve as Entrepreneurs." Swami Ramdev said. 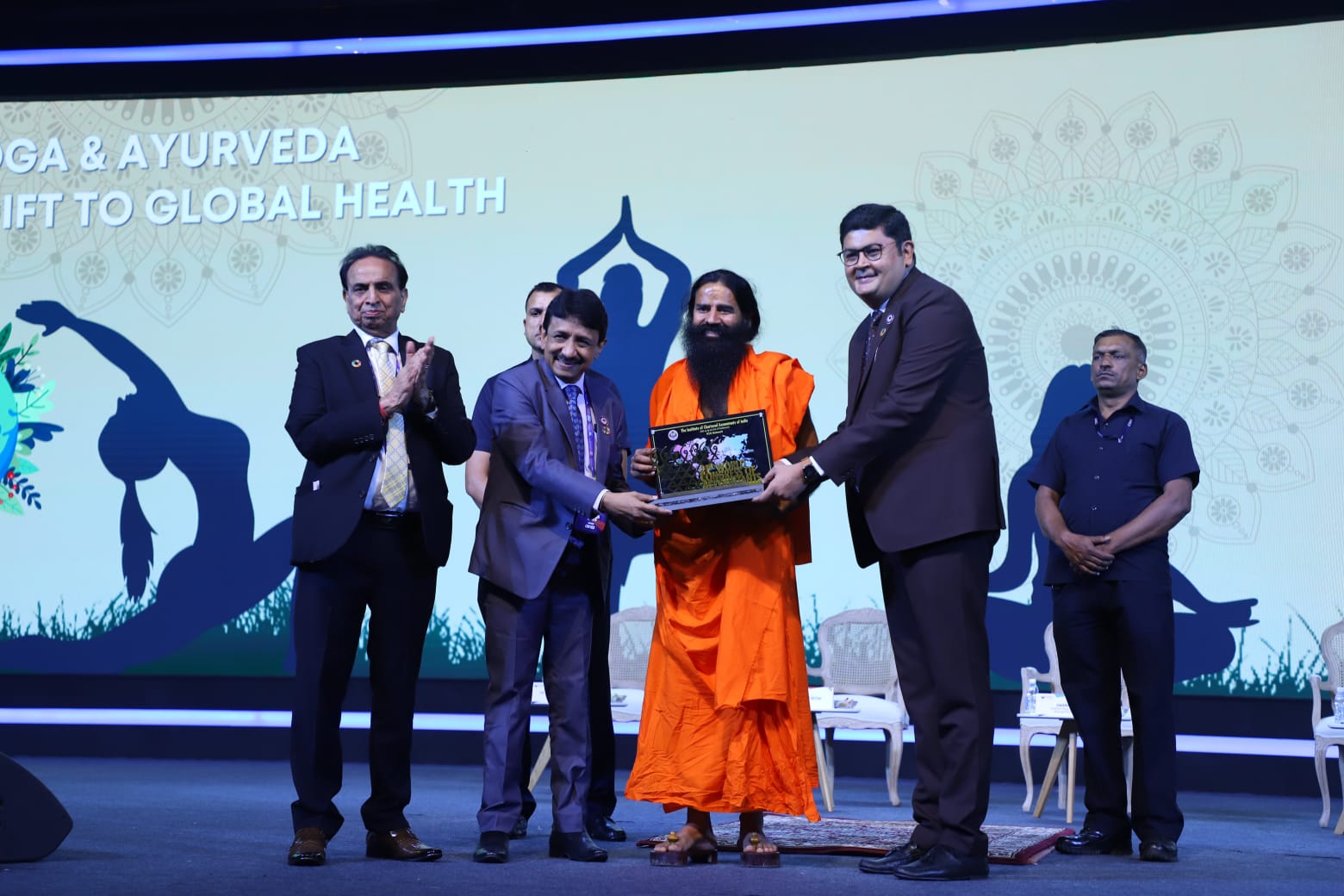 Free Trade Zones have the ability to help businesses compete globally. The 3rd session of the day began with a discussion on how free trade zones can be used by businesses to increase global competitiveness and reduce costs.

According to Mr. Saud Salim Al Mazrouei - Director of Hamriyah Free Zone Authority Sharjah, UAE, Free Trade Zones are the cornerstone of development and create a welcoming atmosphere for foreign investment and contribute effectively to strengthen the global competitiveness of economies.

Session 4 gave us a peek into the future of the accounting profession.

CA (Dr.) V. G. Narayanan - Professor at Harvard Business School provided us with insights on how the accountancy profession may evolve, how we can shape the emerging future environment, how accountants are adding value, changes in the opportunities available to accountants, and why some arrangements might be in the short-term interests of accountants but may not serve us well in the long term among others.

ICAI - A World-Class Educator: ICAI is recognized as one of the premier accountancy bodies in the world and its qualification is globally accoladed.

In this session, we got to know about the process that ICAI is following for a continuous review of education & training to make its qualification globally relevant.

According to CA R. Balakrishnan - Past President of ICAI, "Trust is the soul of the CA profession which is always to be protected,"

“The Supreme Court of India recently stated the ICAI has the best Examination System and other bodies should learn from ICAI,”  CA Purushottamlal H. Khandelwal - Vice Chairman, Committee on Career Counselling said in his speech.

CA. Sridhar Muppala - Vice Chairman of the Students Skills Enrichment Board shared how ICAI's concerted efforts have defied geographical barriers by enabling students from any nook and corner of the country to have parity in quality of education.

India on its way to becoming an Economic Superpower

India is the fifth largest economy in the world, right behind the US, China, Japan, and Germany.

Mr. Gautam Adani, chairman and founder of Adani Group addressed the audience by acknowledging that the choice of India for hosting WCOA 2022 is a recognition of India's journey of becoming an economic superpower.

In his opinion, the intersection of the covid pandemic, the war between Russia and Ukraine, the challenge of climate change and the unprecedented acceleration in inflation have created a crisis for global leadership. 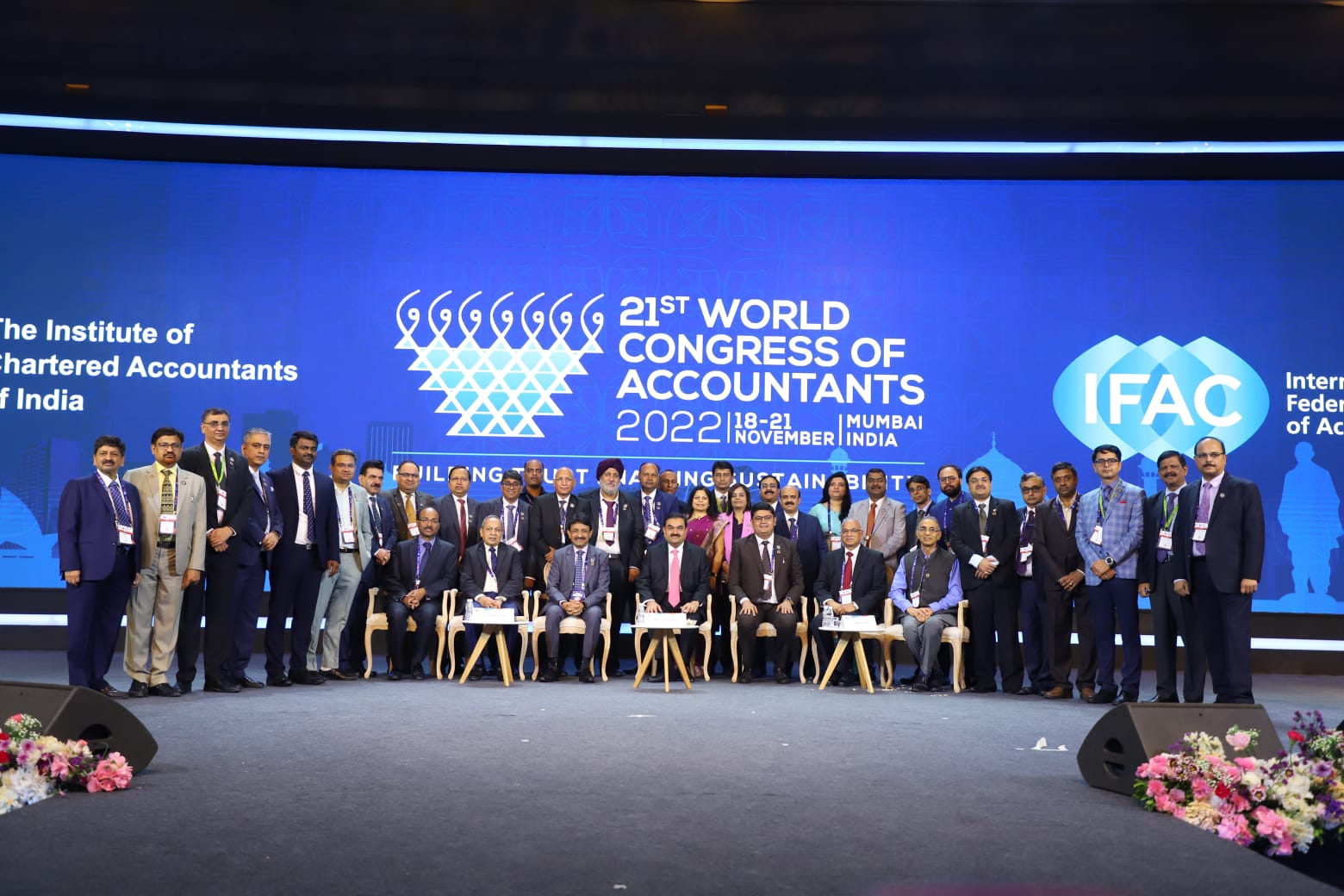 It’s been stated time and again that the Chartered Accountancy profession is a partner in nation-building due to its role in creating trust, confidence, and accountability.

Mr. Girish Chandra Murmu - Hon’ble Comptroller and Auditor General of India presented the theme address by acknowledging and appreciating the role of the profession in nation-building and more.

He expressed that we need sustainable IT Governance and prudent financial management and professional accountants must take note of the government's efforts in this direction.

“C&AG (Comptroller and Auditor General of India) is working with ICAI in various fields which synergises the financial systems of the public sector in the interest of the country,” said Mr. Girish.

CA T. N. Manoharan - Past President of ICAI opined that “Our profession is dynamic enough to reinvent and reorient ourselves in the challenging environment.”

He further rightfully stated how accounting professionals have played a very vital role in the implementation of GST.

Dr. Ajay Bhushan Prasad Pandey – Chairman of the National Financial Reporting Authority (NFRA) pointed out how various committees like the Research Committee and Expert Advisory Committee have been formed to meet with a sound system of accounting.

According to him, risk identification not only helps shareholders but also empowers the area of Accounting and Auditing in the regime of transparency.

“The expectations of stakeholders and technology are going to change the face of audit in future,” said Dr. Ajay Bhushan Prasad Pandey.

Sharing the same view as him, was CA Subodh Agarwal, Past President of ICAI. He too believes that Information Technology is going to be a disrupter and enabler. And we at The Finance Story couldn't agree more.

WCOA 2022 brought the finance community together

Srividya Vaidison was one of the 6000 lucky attendees in WCOA 2022. In the mega event, she happened to run into her beloved income tax teacher, R Bupathy sir, Former-President of ICAI, after more than 20 years.

“When he tells you he still has a card you (and two of your CA classmates) gave, pinned up in his office… could this moment be anything but magical?”

CA Satish Lathiya is one of the blessed who got to meet his mentors, Sripal Jain and Poonam Jain. In fact, it was the first time that he met them in person and had an insightful conversation.

Apart from gaining an insight into the profession’s need of protecting the public interest and responsibility towards sustainability, the attendees were able to network with people around the world.

Some of them were even able to spot their old acquaintances and even mentors in the crowd, that had helped them in their CA journey or their careers. This just goes on to prove how WCOA makes an everlasting impact on many accountants' professional and personal life.