The importance of investing as soon as you start your career, even if the amount is small says CEO of Mirae Asset Investment Managers 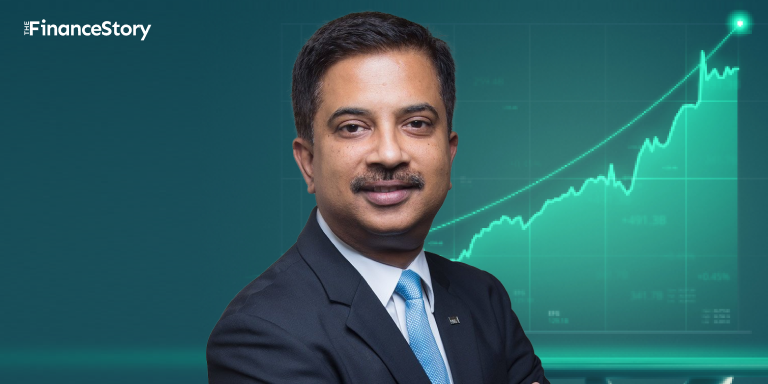 Making money is not about hustling. It is about planning it carefully and by the numbers. While one builds a company he also saves for the future.

In this interview, we talk to Swarup Mohanty, CEO of Mirae Asset Investment Managers where he shares how he handles his money.

He has had a lovely past. He has worked in some large companies like TATA Finance, Kotak, and Religare.

Here are the excerpts of the interview:

TFS: How did your parents shape your thoughts on money? And why did you choose a career in Finance?

Swarup: One never plans the future from a career perspective, but rather one gets led to his or her career and the same thing happened to me.

I was born and raised in Bhubaneshwar, Odisha where everyone had predetermined career paths; mostly civil services or the sciences were preferred.

When I was in college (the late 80s), the whole Economic liberalisation under then finance minister Dr. Manmohan Singh was starting to kick off. That caught my attention and I started reading more about the new opportunities in India.

Right at that moment, I made up my mind to ditch the science stream and get into commerce.

My parents, being zoology professors were really very shocked by my decision. But I anyways followed my intuition.

To answer your question on money, even though my parents were professors, money was limited.

Also in the 80s and 90s, money was never discussed in middle-class families. We spoke more about saving money than increasing it.

But I would say my parents influenced my thoughts about money.

They were not necessarily big investors but huge savers. They had a pension plan and were very sure about their need for money when they retired.

So because of the process, I saw in my house, I knew very early in my life that retirement was the biggest sort of fund that you would need.

And now I am a paranoid retirement fund accumulator.

Swarup: I started working in the mid-90s, but the thing which I still regret to this day, is that I did not start saving in the first seven years of starting my career.

I know I was not earning much money then but, that is not an excuse. If I would've saved or invested even some five hundred rupees per month, I would not be working today!

People say that the turning point in your life is when you get married. In my case, the biggest turning point in my life was when my son was born in 1998. I became a whole new man and naturally began investing.

When I meet young people, the first thing I tell them is to start investing in Systematic Investment Plans as early as possible. 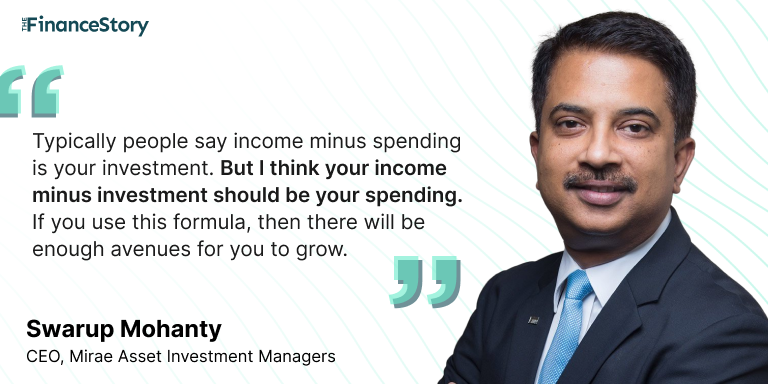 Income minus investment should be your spending

Swarup: I have learned everything from experience.

I also came with that extra baggage of having real estate as the biggest saving. Till as late as the year 2014 nearly 80 to 90 percent of the money I had was in real estate.

But today I am a hundred percent financial assets man. The house I stay in is the only real estate that I own today.

My next strategy is, that I am very unemotional about investing and very mathematical about my portfolio. It's that same age-old formula coming into place.

As a 50-something guy myself, typically it should be 49-51% in favor of equity, but I am slightly aggressive in my portfolio.

So I add another 15 to my age and it becomes around 65% in favor of equity. I rearrange it every year.

In terms of investing in gold, you should know that I come from East India where in my younger days we boys could put the singer Bappi Lahiri to shame with the amount of gold we wore. So by virtue of that, there is enough physical gold at home.

I am, by profession mostly not allowed to buy direct stocks so I basically invest in debt and equity funds.

This may sound weird coming from my mouth, but I still don't know which stocks to buy despite having worked in mutual funds for almost 25 years.

I just don't have that acumen. If I had that, I would be in a coveted position of being a fund manager.

Therefore by necessity, I go to a fund manager to manage my money, it’s as simple as that.

Recently there are some very exciting stories that have come about on the ETF side of the business, especially global funds and all, which I have inculcated into my portfolio.

TFS: What would you recommend to the youth who have just started earning? And what would you advise 40-year-olds who haven’t started investing yet?

Swarup: Contrary to popular belief I have huge confidence in the new generation today. I must say they are much more aware than I was at that age.

It does not matter which background you come from, you need to learn how stocks and funds work. You can start a SIP.

The point I am making is don't underestimate the value of even a small amount of money in the capital markets. Even if it is just Rs 500 you would be surprised when you see what that money will compound to over a period of 20 or 30 years.

For starters, 20 percent of your take-home salary should be ideal to start with. There is no formula to it.

Typically people say income minus spending is your investment. But I think your income minus investment should be your spending. If you take that as the formula, then there will be enough avenues for you to grow.

However, I repeat, when you are younger don't get into the credit card trap and spend money to pay debt.

Typically you work for 30 to 35 years to take care of your next 25 to 30 years now as hospitalisation benefits and our lifespan is increasing.

In my opinion, invest a min of Rs 35,000 in a SIP, with a top-up of 10% every year to reach the goal of having sufficient money when you retire.

Remember costs are accumulating in the area of medicine and other commodities.

We don't have social security like the USA. You have to have your own income.

The economy will hit $5 trillion soon. It is no rocket science to conclude that Indian financial markets or capital markets will create wealth for people. 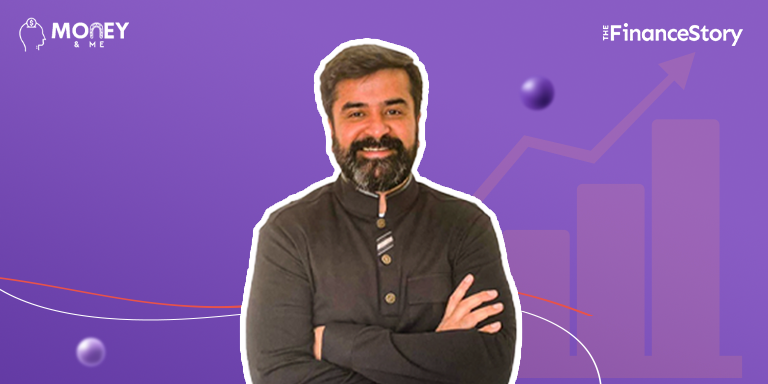 How Aashish P Sommaiyaa, the former CEO of Motilal Oswal AMC and now White Oak Capital deals with money in his personal and professional life

TFS: What are some of the hardest lessons that you have learned about money?

Swarup: Not starting early or missing that compounding of seven years was and is still my biggest lesson.

The second lesson which I learned the hard way is not catering to my goals. Today we need to set investment goals for everything.

Another lesson is, that when you reach your goal, you get out!

The third lesson is ‘plan accordingly’. When I was single my risk profile was something, when my son aspired for higher education, it became something else. Now, when I am looking at retirement, it is completely different. I advise people to think of risk and investing from the beginning.

Investing is a beautiful journey of learning your own self. Mistakes will happen but they only make you better. The key is not to repeat that mistake.

And the most important thing that I have learned over the years is that I take care of my money, I should not expect money to take care of me.

Money is not a bad word, you do need money to survive. but it's not something that controls me.

TFS: Lastly, how do UHNI and HNI invest their money?

Swarup: HNIs are very mathematical and unemotional about investing. You are there to make money. There should be no emotion involved in that.

Secondly, you can do it yourself. There is a DIY concept.

Some people who have the time to analyse, should do it themselves. Otherwise, there are professionals in the market. I believe it is always better to take professional advice.

Now let’s come to the topic of, what the super-rich invest in.

If you look at the top hundred richest of the world, what do they own mostly? They are rich because of  Market capitalisation. Market cap means it is the number of stocks they own in the company.

Equity is the asset class of the rich and famous.