This banker built a world class facial recognition technology, Saffe. Here is how he made it happen as a non technical person.

André is an investment banker turned facial recognition startup founder. Hailing from Brazil he found the idea of ‘paying with our face’. As a non-tech person, it wasn't hurdle-free building Saffe. 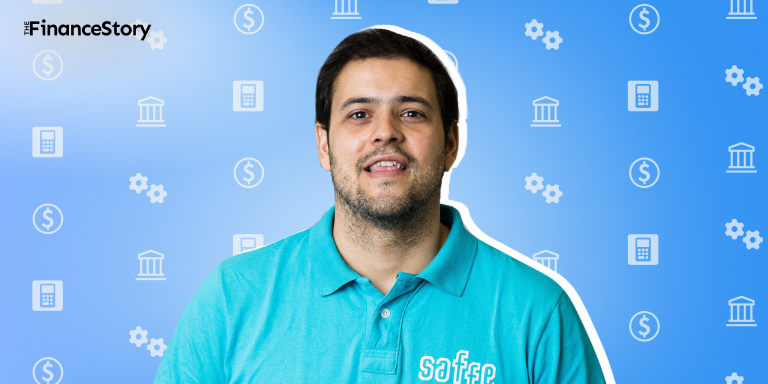 I was born in São Paulo, the city which is known as Brazil’s lively financial center, with a fast and busy lifestyle.

My early life was pretty straightforward. I graduated in Business from a university in Barcelona and started my career as a Stock Trader for Fator, a Brazilian Investment Bank.

I had also worked with other Brazilian Commercial banks, as an advisor for restructuring operations, and Mergers & Acquisitions.

It was during my investment banking career that I got to know about the FinTech industry as such. I saw the enormous opportunities that were about to emerge because of technological innovations. This was somewhere in 2012-13.

Even as a finance guy I was always interested in technology, and had a desire to become my own boss. But this was just a dream as I had no specific business idea at that time.

The hotel that I was staying in had a sunglass store. One day when I was heading for the beach, I forgot to bring both my wallet and sunglasses.

But the seller of the sunglass store assured me, “Look, if you want to buy a pair of sunglasses, take it. I will recognize your face, and later on, you can pay me.”

That was a moment of revelation for me; “What if we could pay just by showing our face?” Aka, facial recognition payment.

And that’s how the seeds were sown for Saffe.

After doing a lot of research my bet was that facial recognition authentication would be one of the major authentication methods in the future, and not just for typical transactions but for the entire banking industry.

The idea was right there, however, I had no knowledge of this type of technology.

As someone with no expertise in coding or technology, I researched extensively.

I even paid for the license of some world-class Facial Recognition Software in Europe. But they couldn't provide the right API for integrating into fintech applications.

I needed to build a proprietary technology for Saffe.

But as a non-tech person, that was my limitation. I needed to find a suitable co-founder who could fill in the gap.

Building a paytech technology: Pay with Your Face

One day while researching, I came across Harvard’s website. They had a niche Ph.D. research department for deep learning in facial biometrics. They had the best researchers.

I immediately called the university to enquire about it, and they informed me that there is a Brazilian guy who just finished his Ph.D. in that segment.

And that’s how I met my co-founder Giovani.

The FinTech space was booming in London, England in 2015, so we thought “Why don’t we start from there?”

We started our journey from a small apartment in London.

First and foremost, Giovani started working on that proprietary technology that I was looking for. It is basically the neural networks that we own for the facial recognition engine and for Liveness detection.

First, we built our Minimum Viable Product (MVP). It had our proprietary facial recognition technology for users to create a payment wallet and use it for transactions.

But very soon we pivoted from a B2C to B2B model.

Saffe is facial recognition or biometric service provider. We offer SDK or software development kit and also API for iOS, Android, and websites.

Users can integrate our products wherever they wish, be it a banking application, payment application, or digital ID.

As a non-tech founder, the journey was not hurdle-free

As of now, we have around 10 large clients in the FinTech and banking sectors. We are National Institute of Standards and Technology (NIST) certified and are among the best biometric providers in the world.

And have offices in Sao Paulo, London, and even Tokyo.

But was it easy?

Limited knowledge of tech: As a non-tech person I had to take a lot of courses, on both paytech and Biometric Technology.

Added responsibilities: When you start your own company you don't have a boss. You have to take the lead and take all the responsibilities of the business. But that didn’t pose any difficulties because I was very committed to it.

Starting up in a different country:  I think the second biggest challenge was starting a venture in a completely new country. English is not my first language so the language barrier was there.

The startup stress: There was also the stress which I think every founder experiences at the beginning. It took quite some time for us to get certified, which just added to the already piled stress. Because of this, taking care of my physical and mental health was also becoming a challenge.

But in the end, utilizing my investment banking skills, I was able to keep a hustling mindset.

Regulatory landscape and legal issues: Now pretty much everyone is using facial recognition software. But back in 2015, it was a fairly new concept. So we had to assure our clients that taking care of users’ privacy is of utmost importance to us.

So you want to enter the startup ecosystem... as a nontech person?

I think it's always been about being open to learning. That is how my transition from the banking industry to the biometrics industry became possible.

If you're working in the banking or finance industry, and want to start a new venture, you must be open to innovating and learning new trends in technology.

The next step would be arranging funds. In our case, like most startups, we also bootstrapped our company. Giovani and I put in our money, and our family and friends also invested.

SaaS start-ups need to develop POC (Proof of concept) which is why when starting out, we mainly focused on being financially strategic.

But later on, we had to look for outside funding. We didn't raise a huge amount of money like B2C companies but we did a seed round from prominent investors like Telefonica Germany and NTT DoCoMo of Japan among others.

We are looking into raising series A funding, but the thing is, we have a good profit margin and a profitable business.

It's possible that we will be at our breakeven point very soon. So I would say, ‘Do not let the thought of funding stop you.’

And last but not least, be resilient. There is a possibility that you'll hear a ‘no’ 9 times in a row, in your journey. But if you stick around, you might get a ‘yes’ on the 10th try.

In 2022  Saffe.ai was ranked by Sifted as Europe's 17 most promising payment startups to look out for by VCs.

Fill out this form if you want to be a part of these insightful conversations, and learn more about the behind-the-scenes of startups as a non-tech person https://forms.gle/X2Hu7rtJvH4SBeAB7