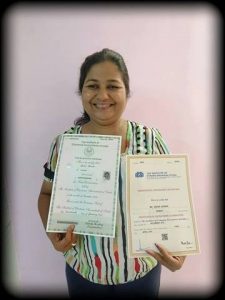 Deciding to pursue CA to motivate my daughter

It all started with my daughter Radha Bordia wanting to be a CA like her dad - CA Sanjay Bordia. One day she randomly mentioned, "Maa why don't you start studying CA with me?". This idea stayed with me and I quickly decided that yes I want to be a CA. So I went and registered for CPT and there started my CA journey of 7 long years!

I was an Art & Crafts teacher in Don Bosco for 6 years, before we moved to Bangalore as my husband got a transfer there.

I failed in my B. Ed, so it was difficult to continue as a teacher without a B.Ed degree in Bangalore. Hence I had a lot of time on my hands, and the idea of doing CA meant using my TIME effectively. Also, ICAI was so close to our house in Bangalore that it felt like it was meant to be.

CPT was a challenge. Getting back to books after so many years is not easy. Maths was tough; it gave vibrations in my head. However, with family by my side, I managed to clear CPT (124 marks). In fact, Radha and I both cleared CPT, Together!

Then came IPCC! We both registered together, joined classes together, and gave the exams together.

I decided to give just the 1st group of IPCC since I had to manage the house and family. I didn’t clear it on the 1st attempt. I cleared it in the 2nd attempt.

Then, for Group 2, I got together with my daughter. She had her 1st attempt and I had my Group 2.

We both cleared IPCC in this attempt and felt like we had crossed the hill. But the mountain remained though (CA Final).

After clearing IPCC a LOT of people told me – “Why do you want to pursue CA? After articles of 3 years, you would have to give the CA final exam and that’s a lot for you. You’re already 44 years old. Are you considering doing jobs or something?

It’s assumed that once you have a grown-up kid there is no need to find new passions.

It’s assumed that there is no possibility to rise to unexpected heights.

It’s assumed you are too old.

But I didn’t let these things affect me. I was sure to not let go of this. I had no reason to quit. I have come so far and I will keep the same attitude and move ahead.

The enthusiasm for achieving greater things got to me so bad that I even enrolled in Company Secretary (CS) course.

I registered as an article. I used to attend 3 hrs of class in the morning and then go for my articles, then 3 hrs again CS class in the evening, along with managing my home. I dedicatedly attended all my classes, studied regularly, and managed the house the same way I used to earlier. I am very organized and disciplined as a person, and this quality added to my advantage!

At times I used to feel tired and everything wasn't smooth sailing but again looking at the brighter side does help! The phase of my articles to becoming a CA has made me so much stronger than I was before.

My daughter and I both gave our CA Final attempts together. The 1st group we both cleared together in the 3rd attempt. The 2nd group we appeared together but couldn't clear. We pushed ourselves to the limit and we helped each other immensely. The journey of becoming a CA becomes way easier and less stressful when we have somebody to prepare with. I was playing a dual role of a mother and a student.

It was tough on Radha too. However much she was proud of me - she had two kinds of pressure; peer and mother pressure. I was her competitor indirectly!

Everyone kept telling her- “hope you clear before your mom”. As a mom, I could feel her situation.

In the next attempt, I took a drop as I did not want to stress my daughter, even though she was against the idea of me doing so.

In the coming attempt, I had to give the exam as there were rumors of IFRS / GST being introduced. Had I waited for my daughter to clear and the new stuff comes in I would have to literally restart my studies.

We both gave this attempt and luckily Radha cleared. I felt so relieved that she cleared first as I knew the unsaid things that she was going through.

I started my studies again since it would be my 5th ATTEMPT in Nov 2016. Suddenly another twist was introduced, to my already worrisome situation!

My in-laws, who live in Udaipur, wanted us to visit them ASAP. My husband keeps visiting them every fortnight. However this time they kept calling and insisted we come immediately.

We went there, spent some time with them, and just when we were about to return my Father In Law got a paralytic attack and was rushed to the ICU.

My husband couldn't stay for long as he is in the service sector. So I had to stay back. My Father in law was in the hospital for 90days!

I studied outside the ward literally for 75 days! It was tough, so much noise, so many people calling up, doctors visiting, etc. But it was my duty to be there for my family. We had a lot of relative support as well.

Finally achieving victory over myself by becoming a CA

My exam days were nearing, as they were scheduled to start on the 10th of Nov. I was registered in Mumbai for the exam so I had to get back. As destiny could play a part Radha couldn't get a job so she came in and sat with her grandfather. And after I gave my exams I came back to Udaipur.

I was sure that I wouldn't clear! I hardly got 10 days to study. On the result day, I was in Udaipur tending to my in-laws (both sick in different capacities). Suddenly I get a call from my husband saying 'You are a CA now' I really had nothing to say, I literally froze.

I was so elated that on hearing this I went and hugged a distant relative who came to visit my In-Laws in the hospital. That's how I celebrated my success, my victory, myself.

Later on, I went and told my Father in Law about it. He was so happy.

As I was still recovering from the greatest shock of my life that I had finally become a CA, destiny played a sick game with me and the next day my Mother in law expired and so did my Father in Law in a few days.

All this would not have been possible without the support of my husband who stood by me, motivated me to pursue my studies. It was difficult for him to come to an empty home where his wife and daughter were busy with studies. But his patience and encouragement have been my strength.

Amazingly enough, the alone time he had, made him write a suspense-detective fiction novel on the life of a CA - THE CLAIM!

Now that I have achieved nearly everything that I wanted to, the question “What next?” remains.  To that, I would say maybe mentoring, coaching, or whatever I feel like. I have yet to decide.

Not to mention, I have already been featured in newspapers and got a lot of recognition & respect.

A lot of people told me that CA was bound to make people fail. And I was entering it at an age where I would give up easily. I want to tell them all that they were wrong and nothing is impossible.

You can be whatever you want to be at any age!

By clearing my CA I have set a new benchmark for my daughter. She has always been fearful of growing old and not getting to do things that she could do right now. But after seeing me achieving new things, she takes it easy. It's made her believe: Life is interesting!

Struggles are a part of life. By pushing oneself, seeing the brighter side, and working towards it one is bound to succeed. Enjoy the process and be happy.

"Not everyone can be a child prodigy, but we all can strive for late-life success”.