Goldman Sachs, the well-known investment bank fired around 700 employees across India, including IITians and IIM graduates. The affected took to LinkedIn to share their thoughts.

It’s been quite an eventful past few months for Global banks such as Morgan Stanley, Citigroup and the like.

Dealmaking opportunities dried up because of high-interest rates, inflation, and the war between Russia and Ukraine among other reasons. This made them resort to the age-old cost-cutting method; laying off the workforce.

Goldman Sachs, the well-known investment bank was the latest one to begin its most aggressive redundancy operation.

According to reports, the bank fired almost 3,000 employees in a day after calling them for a meeting at 7.30 am. A number of top executives, including vice presidents will also be affected.

During the firing spree, Goldman Sachs dismissed around 700 employees across India, including IITians and IIM graduates.

Yes, it was devastating for the employees.

If you open up Linkedin you’d find at least dozens of the affected workers pouring their hearts out on the platform.

Dakshyani Singh joined Goldman Sachs straight out of college in 2019 as a Technology Analyst.

She worked across different business units in different roles and joked about being the youngest MD in a few years. Dakshyani low-key wished for that.

Little did she know that life had other plans for her. Dakshyani was one of the many fired in this mass layoff season.

Manas Ranjan Panda was one of the many impacted by the thousands of layoffs.

Manas was a VP of Equities Risk Trading at Goldman Sachs.

The news certainly came as a shock to him as he was promoted just last month.

“During my time at Goldman, I worked with some of the finest trading minds in the business and thoroughly enjoyed my time,” stated Manas.

“I’m going to miss all my amazing coworkers who truly became my friends. And I will always value the learnings I got during my little over 2 years stint at GS.”

He is still processing this difficult time as well as looking to kick-start the next phase of his professional journey.

He was one of the victims of the firing frenzy of Goldman Sachs. What’s upsetting is that the news came right after his 23rd birthday.

The Chemical Engineering graduate from IIT Kharagpur worked as a Software Engineer (Backend Developer) as a part of GS’ Digital Bank, Marcus.com.

“It was my first job and my first experience in software development. While my time at GS was roughly 6 months, I am grateful that I had the chance to learn and grow in such a conducive environment,” stated Shubham.

But the beautiful community of Linkedin was more generous than ever in stepping up to show their support. 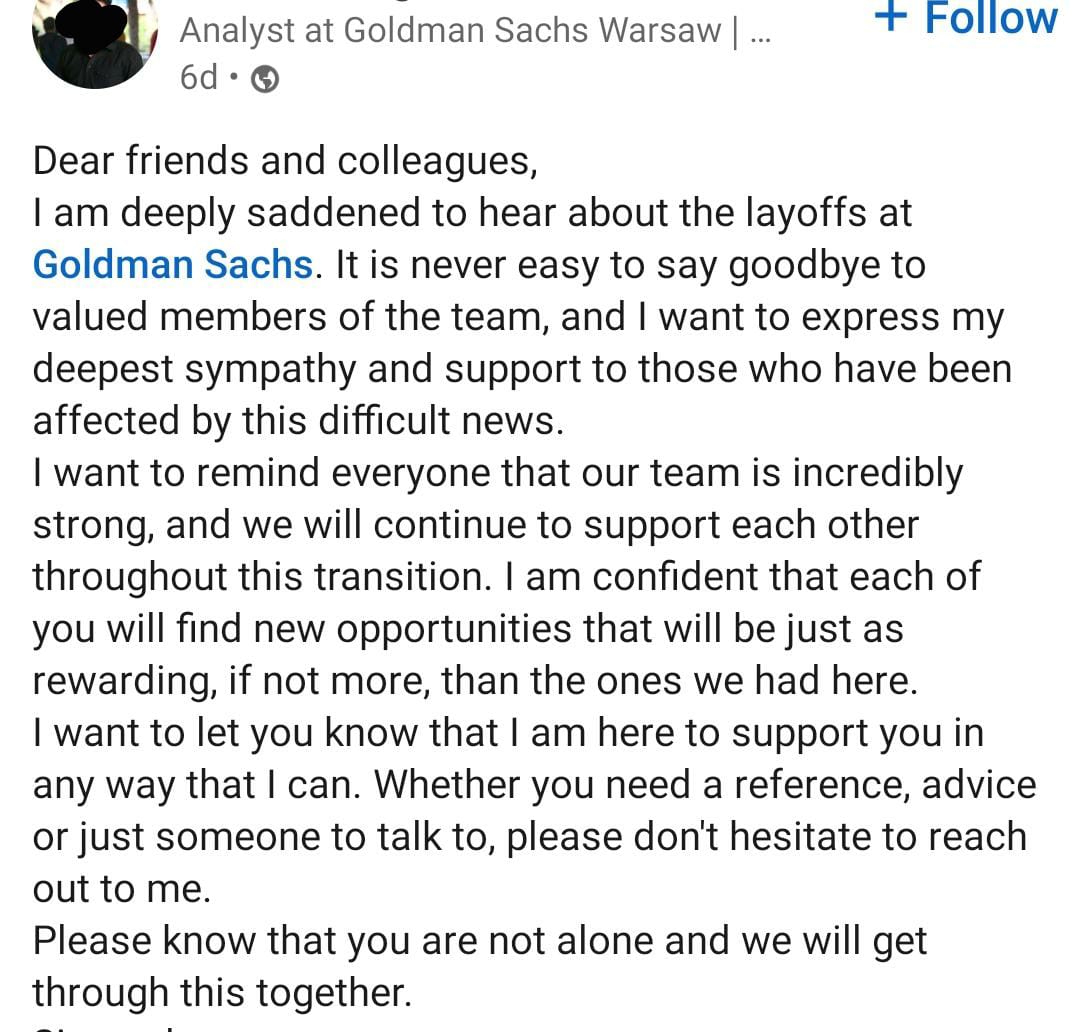 Job losses may be emotionally and financially damaging to those who are impacted. Some of them most likely stay loyal to their organisations for years, helping their respective companies in achieving their objectives.

Only to get told one day "Pack up your stuff and leave." Their self-esteem gets shattered.

Shilpi Soni was a Software Engineer at Goldman Sachs. But that one news turned her life upside down.

She is the first person in her family to pursue a Master’s in a foreign country (USA). Coming from a rural family it has been one roller coaster of a journey for her.

Remember that a layoff is not a reflection of your worth or ability. It's important to focus on the things you can control and take action to move forward. Have belief in your worthiness.

It's critical to concentrate on what you can control and take action to go forward. Believe in your own worth. 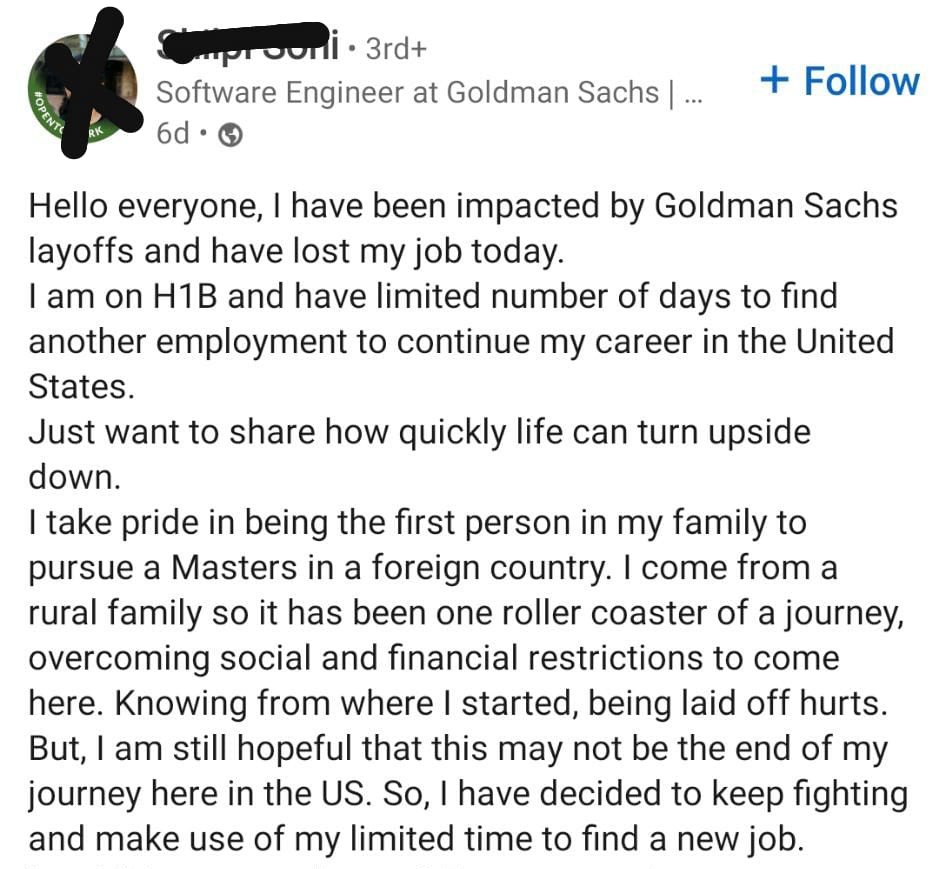 Goldman Sachs was founded by Marcus Goldman and ‎Samuel Sachs‎ in 1869. Its headquarters are in Lower Manhattan, New York, with regional offices in London, Warsaw, Bangalore, Hong Kong, Tokyo, Dallas, and Salt Lake City, as well as other worldwide regions.

Goldman published its third-quarter report in October 2022. It was revealed that there was a 44% drop in net income compared to the same time the previous year.