ESOP, the buzzword that is here to deliver. Has it kept its promise?

Startups do love the ESOP route to retain talent, it is also the best route to make wealth if the startup or the business succeeds. 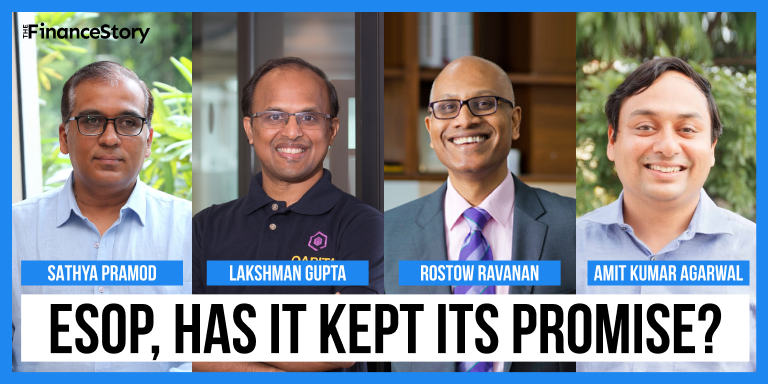 An Employee Stock Ownership Plan (ESOP) enables employees to have ownership of the company where they work.

If you are a modern-day employee then get used to the term ESOP. You cannot escape it because startups will give you stock even if you don't want it, especially after a year of working for them.

In the recent listing of companies such as Zomato, Nykaa, and Paytm, a whole host of Employee Stock Option Plan (ESOP) owners made money.

There were also several ESOP buyback programs from 40 private companies such as PhonePe, Razorpay, Swiggy, and Upgrad that showcased the power of rewarding employees for sticking with the founders' vision.

According to Longhouses Consulting over the last 18 months around Rs 3200 crore of employee shares were purchased back.

After eight years of highs and lows, even NoBroker did some buybacks. The founder Amit Agarwal tells The Finance Story that ESOPs are very important.

"We basically did some secondary of ESOPs for some of our employees. I was telling somebody that ESOPs are also basically like seeds of fruits, you just allow the tree to grow, and when it blossoms you can see within five years how much it multiplies and rewards the employees. So we created good wealth for people who have stayed with us for five years" says Amit Agarwal.

"Bangalore's startup founders have set the foundation for ESOPs to create wealth and we saw a lot of people making it big. Earlier it used to be guys from the Silicon Valley, but Banglore has created millionaires because of ESOPs," says Sathya Pramod, director, and founder of KayEss Square Consulting

The story of ESOP began with Infosys when co-founder N S Raghavan and former CFO Mohandas Pai created the ESOP pool which created the first bonafide management millionaires in India.

After that, every IT company followed suit in India. 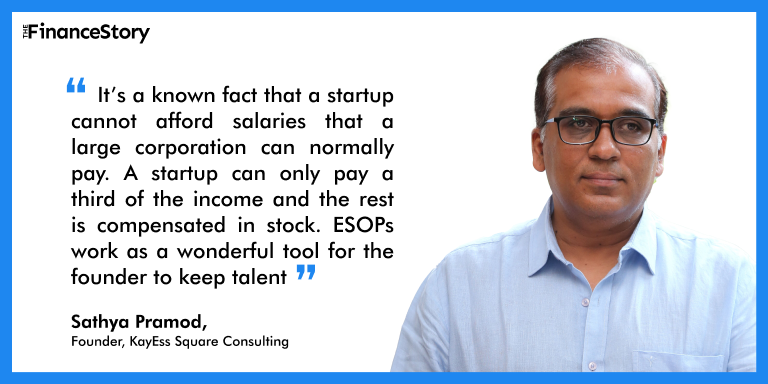 ESOPs work as a wonderful tool to keep talent

Flipkart today has an ESOP pool of Rs 17000 crore

Unfortunately between 2004 and 2018, there weren't great stories of ESOPs. Then Flipkart happened in 2018, where the founders and several employees made money when Walmart paid $16 billion to acquire the company.

It made the startup world take notice of the benefits of ESOP plans to retain talent and reward them in the long run.

Flipkart today has an ESOP pool of Rs 17000 crore.

"It’s a known fact that a startup cannot afford salaries that a large corporation can normally pay. If an employee was earning say Rs 60 or Rs 70 lakhs salary in a corporation,  a startup can only pay a third of the income, and the rest is compensated in stock. ESOPs work as a wonderful tool for the founder to keep talent that can go the extra mile with the founder" says Sathya of KayEss Square Consulting

In the USA companies like Facebook, Amazon and Google have made several of their employees and senior management earn millions.

In the USA Publix Super Markets is completely owned by management and its 225000 employees.

India has 100 Unicorns, and by the end of the year there will be 100 non-founder executives in the Rs 100 crore club according to Longhouses Consulting

While ESOPs are creating a buzz in India with the Unicorns, many startups still struggle to offer employees a buyback to offer transparency on ESOP ownership.

"There is a need to structure ESOP ownership in a way that can really benefit employees so that they don't pay tax on leaving a company. Founders in India can hold on to the shares of employees for a period until the exit happens or till the period the tax comes into effect. Unfortunately, many founders force employees to upfront the tax immediately upon their release from startup and the shares lapse in a month unless the employees pay the tax. A majority of the startups follow such a method," says a VC who did not want to be named.

However, several founders are optimistic about the future.

"In the last year, I’ve seen the shift happening, where many people who were working in large corporations are now starting on their own or joining a startup. The startup ecosystem has drastically changed for the better."

"Attracting and retaining competent professionals are challenging tasks faced by many organisations. Besides cash rewards, it is important for organisations to make their employees believe that their personal growth is linked to the growth of the organisation. Equity Incentive Plans (EIPs) are one of the important tools to achieve this objective. The feeling of ownership has been generally observed to have a positive impact on the employee engagement scale, especially in the case of employees who are thinking of a long-term career with the organisation."

EIP is an employee benefit plan under which an employee has the right to acquire equity at a discounted value without any underlying obligation to do so.

Rostow Ravanan, co-founder of Mindtree and founder and CEO of Alfahive believes in retaining talent with ESOP.

"I believe the war for talent is particularly intense right now. In my 20-plus years in the tech industry, I have never seen such high demand. But, don't only listen to all the great stories on ESOP, look at the thousands of startups that struggle. A lot of ESOPs have become like toilet paper, as well. What you see are successes in the news, 95 percent of the startups don't make it. So before you join a startup, understand the company and be deliberate about it."