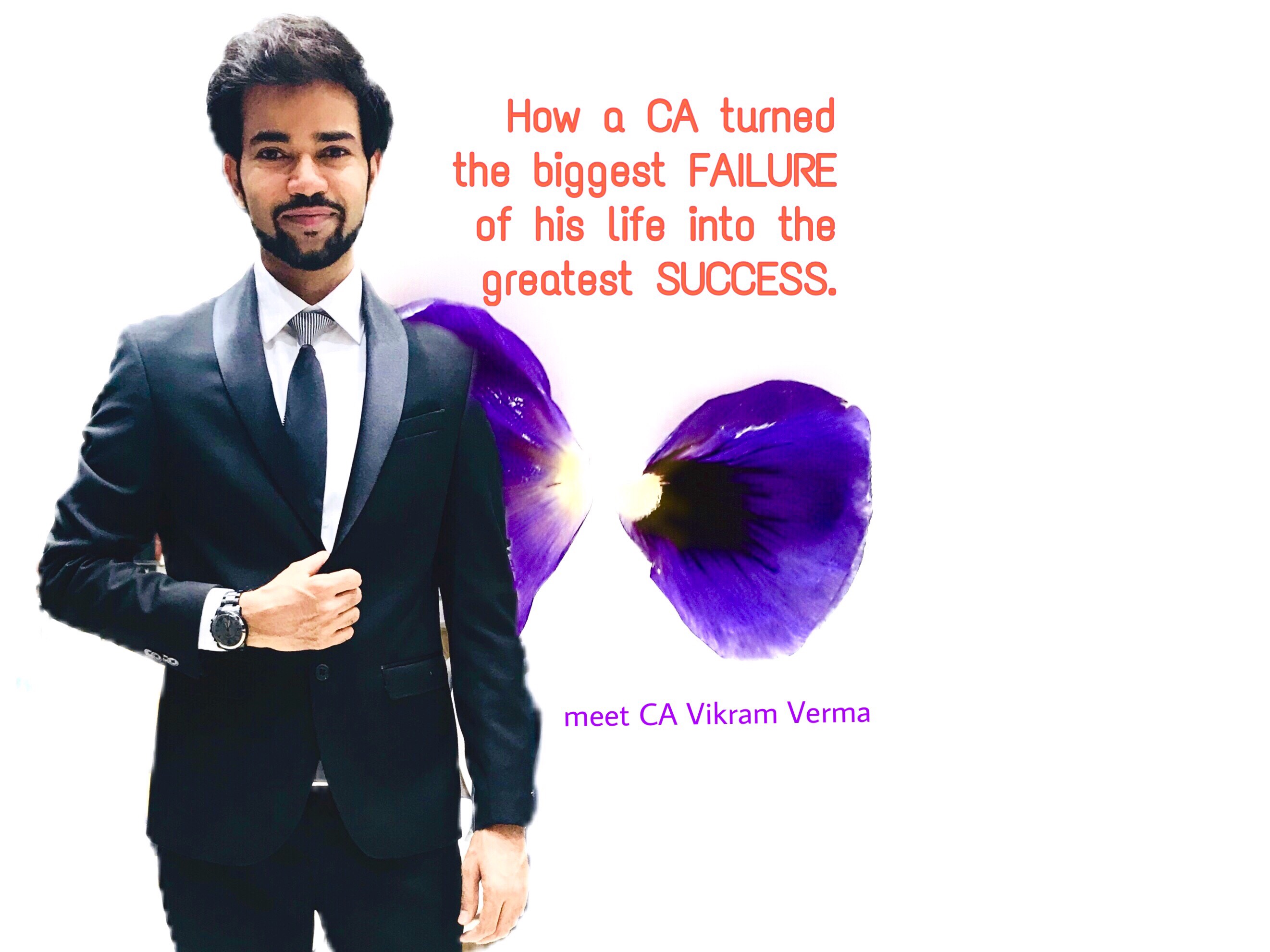 Meet Vikram Verma - Author of 4 books, Lyricist, Composer, Painter and a Chartered Accountant. His quotes from his novels and self-help book are world famous under his pen name Vikrmn.  He too has a story, a decade old, a different one.

"I was a studious student, always topped in school and college. Most parents would give me as an example to their children - Verma Ji da Munda to first ata hai, were generally referring to me (laughs) and that was the reason I was not liked by many kids," says CA Vikram Verma from Delhi.

"Moving ahead to my CA journey, I appeared for CA Final Exams (Last level CA exam) and when the results were about to be announced, my parents were happy and as always, they said giving 100 bucks - Tinku Halwai and I understood as always because they were sure of the results.

But that result was not ordinary, it had a twist to it. Verma Ji Da Munda fail ho gaya - quipped an auntie whispering outside our gate while I was still in shock, sitting in front of my parents who were holding sweets of Tinku Halwai.

The reason for the shock was that I had failed in CA Final Exams and that too my favorite subject MICS (now this subject has been replaced by ISCA), an IT subject. When 99.99% CA students hated MICS, I was in that .01% who loved MICS. I was expecting 82 marks and I got 28! I had checked the results rubbing my eyes ensuring I was not reading reverse, but alas.

Chalega to girega, girega to seekhega, koi nai - said my mom consoling me as it was one of the first and biggest failures of my life. She was so sweet, not due to Tinku halwai sweets, Moms are Moms. Dad, an Ex-Army guy, was silent, didn't understand how to react, couldn’t even scold me saying - Look at Sharma Ji da Munda, as that chap appeared third time for graduation, through correspondence.

But I was still in dole-drums, as my friends and students, who I had taught the concepts of subject MICS (now ISCA), had scored between 50-70 marks.

I want my answer sheet - I yelled and found myself on the bed, sweating. It was 3 am; the ghost in me was awake who wanted to know, WHY I failed.

Next day I wrote an email to CA Institute (ICAI) to know the reason for my failure. At the same time, I also applied for re-totalling, as rechecking concept was not there. A month later I got a reply from them; same, 28.

I asked them to send me a copy of my answer sheet but they had no such rule back then. I thought to file an RTI but my peers suggested not to waste time and study harder for the next attempt.

People said be positive, but I always generate negative energy and channel it positively.

I typed all my MICS notes on a computer making a 300 pager. Then I dialed up the most famous publisher of CA scanners and told him my story and asking out if they'll publish my book as - MICS Unleashed.

The publisher first laughed but then got confident of my confidence and asked to send the first 3 chapters on mail.

16 Oct 2007 - I got a call at 7 am from a friend - Your photo and story are on the first page of Chandigarh Newsline. I drooled while talking to him, disconnected and slept again, thinking it to be a dream. Then another friend called up and said the same thing about another newspaper.

Mom entered my room holding a newspaper of which the title read - This CA student has a book for his comrades. The story was covered by 5 prime newspapers.

That day mom said giving me few bucks - Tinku Halwai and on the way back I heard some uncle yelling - Verma Ji ke Ladke ko dekho.

I had converted the biggest failure of my life to biggest success; only by channelizing the negative energy to positive means.

Today, 1 self-help book, 2 novels, 10 poems, 21 songs, 161 world famous quotes and my name is recorded in Limca Book of Records. All good things push me to do more and song composing is my next move along with my 5th book which is again a novel.

20k strong FB fan page Author CA Vikram Verma, 9k Instagram and 4.5k Twitter followers, daily re-posting of my quotes by people around the world, or say, friends not yet met and my counting is on.

My advice to others - Own your way, your own way. You are a failure, not the time when you are defeated but when you give up fighting," he concluded.

P:S: You can reach him at v@vikrmn.com/thecastory@gmail.com