From Bangalore to US-based VC firm with a fund size of $200 million: Anil shares his investment strategy in startups 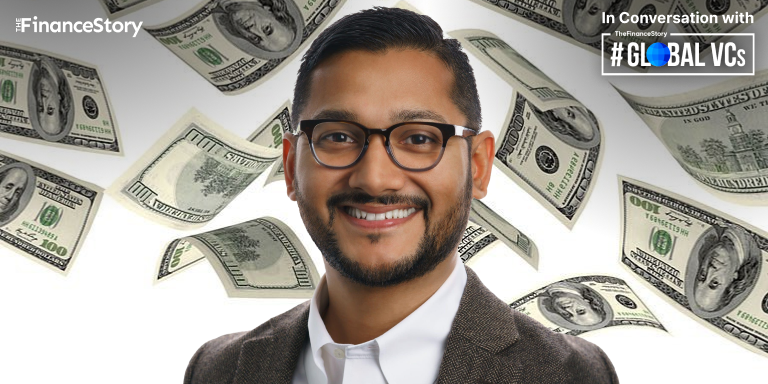 ​​​​​​Born in Bangalore, Anil Achyuta is the founding member of TDK Ventures, the VC arm of the Japanese MNC, TDK which invests globally in revolutionary tech startups.

The VC firm has a fund size of USD 200 million and a portfolio of approx 30 early-stage companies, with many soon to enter the unicorn club.

Anil is a scientist and has a Ph.D. in Chemical / Biomedical Engineering.

He talks about the vision of TDK Ventures, its investment strategy, and the importance of a finance professional in a startup.

Here are the excerpts of the interview.

TFS: You went to the US and transformed yourself into a scientist. What drove you to succeed?

Anil: To be precise, it is the fear of failure. It also comes from being born in a middle-class family. It forced me to think “What is it that I need to do to make an impact in this world?”

But one particular instance which was the final push for me was when my uncle from the US asked me, “Why should anybody hire you?”

I gave it a lot of thought and realised that I had no salient qualities for an employer to hire me.

That was the turning point for me I guess.

I decided to go to the US and become a scientist. As a scientist, I wanted to create products and technologies that would help the real world.

I must tell you that going to the USA was not easy for me, I had to work very hard. Luckily I got a full scholarship to the US.

I graduated with my Ph.D. in 2009. It was, to say the least, the worst time to find a job, because of the Great Recession.

I remember applying to almost 190 companies and getting only one callback. Basically, it was not even a proper rejection, they didn't even send me an email clarifying “We reviewed your resume, but we cannot qualify you.”

I had just gotten my doctorate and filed for patents as well, but had no job. As you can imagine, it was very frustrating for me.

Fortunately, I managed to find my way and started off with Draper labs.

TFS: TDK Ventures has taken bets on things that we see in science fiction movies. But what is the origin story of TDK Ventures?

Anil: The TDK ventures origin story is quite interesting, really.

He was trying to figure out what to do next.

Fortuitously he went to a class at Stanford and one amazing professor there showed him the ways a Corporate Venture Capital arm can die, and why it's a bad idea to start a corporate venture capital fund.

Whereas Paul Holland, former general partner at Foundation Capital, (which backed Netflix, Chegg, and Uber) showed how the corporate venture capital arm can actually work out.

These diametrically opposing views gave him an impetus to create Corporate Venture Capital to invest in startups that were building futuristic products.

It thankfully impressed the CEO of TDK, Shiganeo Ishiguro, so much so that seven minutes into the pitch he stopped Nicolas and said “That's exactly what I'm looking for. I am going to grant you $50 million. Go and invest in those startups.” And that's how it all happened.

I joined in 2019 the same year TDK Ventures was launched, and could not be happier to be a part of this. 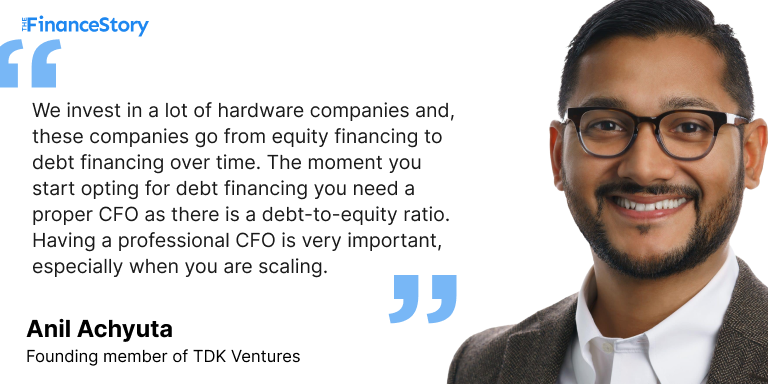 Having a CFO is important when you are scaling your startup.

TFS: What does impact mean to you? And what does TDK Ventures aim to achieve?

Anil: First is the financial impact, which means we are like any other VC where with every single investment we want to return the fund. The impact is a triple bottom line for us.

So if you are thinking about small ideas, we may not be the perfect fit for your startup.

The second one is the strategic impact which means TDK is going to do everything in its power to bring value to a startup.

TDK crafts a strategy by backing the king of the hill. And if it happens to be very strategic, then perhaps it would turn into an M&A, from TDK.

And the third impact is about doing good things for the earth.

For that, we use United Nations’ sustainable development goals.

TFS: How does a VC build a great portfolio to be successful? And how do you know that the founders can make it big?

Anil: You have to strategically build that portfolio.

Make sure you have got enough exits to say to your LPs that for the next fund, “I am returning money back to you, but I am also creating transformational companies." At TDK Ventures we have 4 exits as of now!

Suppose you are doing a $150 million fund, only one or two of these startups will return the whole fund and the rest will be ordinary.

So there is some failure rate involved.

Now the big question is, how do we gauge who to invest in?

Let me share a great example of an early-stage startup that we invested in.

Tian Yu had a drone company called Yuneec. It was actually one of the biggest competitors for DJI which is the largest consumer drone company in the world.

We knew that Tian was a helicopter pilot, hence we came to the conclusion that he could build an amazing drone. But we didn't know whether he could build a proper flying car company.

For that reason, at the seed stage, you should back the founder only if you know that he or she is credible, and can attract talent without offering a huge salary.

Of course, there is risk involved in seed investing. But I think when you begin a fund, you should invest in slightly earlier stage companies.

I am still learning because I am more of a later-stage guy.

Another mistake people make is that they invest in one founder, whereas you should invest in a team. Now, if you get wood by Elizabeth Holmes, then you are in serious trouble.

So ask yourself before investing, “Are they real?” Because there's only one Steve Jobs and it's very difficult to kind of replicate that.

At TDK Ventures we invest in the team that brings everything together.

Today almost 25 percent of our portfolio startups are soon to be unicorns and we have already had 4 exits.

TFS: How do you plan for series A, B, or C with your startups and ensure that they get to a higher level?

Anil: A startup is like a little child. Just like little children, ideas are very fragile at the early stage.

That’s why they say, it's very easy to kill a startup, but it's even more difficult to nurture one, right?

The hardest part however is to find a lead for your next round. People go back and forth for a significant amount of time to find the lead.

In that case, as a founder or venture capitalist, you have to build a syndicate where people have deeper pockets. You cannot just surround yourself with people who are not going to support this company for the foreseeable future.

Remember that having a syndicate of investors is not just important, but is absolutely critical.

The investor who is leading the seed round should know other investors who can come in and lead the A, and B rounds, going all the way up to the IPO.

It's somewhat like orchestrating a symphony. You have to be able to understand who can actually make that beautiful sound.

My philosophy is, “I would rather sacrifice my ownership to build the right syndicate.”

We take it very seriously and this is how you build unicorns.

TFS: Lastly, does it help to have a finance person amongst the co-founders or founding team of a startup?

Anil: The best founders are attuned to the financial side, the business side, and also the technology side. In fact, when we look at startups, it is one of my requirements from the founder.

If I see any form of indiscipline on the financial side, from anyone, including the engineers, I would actually expel them from the team.

Having a professional CFO is very important, especially when you are scaling and not (necessarily) when you are just starting out.

And it really helps you to reduce the cost of capital.

Also when you are going public, it prepares you to become a proper company because of having that financial rigour.